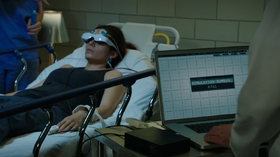 Shaw escapes her captors, but the team is unsure of her mental state when she begins to act paranoid and reckless.

6,741 refers to the number of virtual reality simulations Samaritan has put Shaw through to brainwash her into killing her comrades, and in the hope of her revealing the location of the Machine.