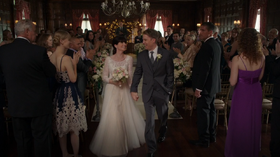 "A More Perfect Union" is the sixth episode of Season 5, and the 96th produced hour of Person of Interest. It originally aired on May 23, 2016.

The Machine sends Reese and Finch to a wedding to protect a pair of POIs before their nuptials. Also, Fusco becomes angry at being kept in the dark by the team and takes it upon himself to investigate a string of missing person reports.

The phrase "a more perfect union" is drawn from the Preamble to the Constitution of the United States of America. The complete preamble reads:

We the people of the United States, in order to form a more perfect union, establish justice, insure domestic tranquility, provide for the common defense, promote the general welfare, and secure the blessings of liberty to ourselves and our posterity, do ordain and establish this Constitution for the United States of America.

The preamble sets forth a statement of the vision of the newly formed United States of America that will be embodied in the Constitution.

The use of the word 'union' also reflects the idea that the episode is about a wedding.