Person of Interest Wiki
Register
Don't have an account?
Sign In
Advertisement
in: Characters, Persons of Interest, Female Characters 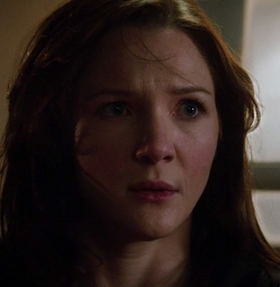 Abby Monroe is the older sister of a soldier who was killed in Afghanistan, Joey Monroe. She worked for a charity until she discovered that her boss was stealing money from veterans.

Abby met Shayn Coleman after he came into the charity looking for help after Philip Chapple's efforts caused him to lose his fiancé and home. Abby discovered Chapple's illegal activities and tried to expose him, but was fired and framed for stealing to discredit her. After being threatened, Abby dropped out of contact with everyone except Shayn who she fell in love with and moved to a new apartment. Abby tapped into a nearby payphone for communication and got a temp job that allowed her access to the city's Planning Department where she stole a file on the engineering specs for the block Merton Watts' investment bank was on. The two plotted to rob Chapple's safe deposit box for the stolen money, but had no plan for what to do with it afterwards. Abby's actions drew the attention of the Machine and through it, Finch and Reese. With the help of a sympathetic Reese, Abby and Shayn break into the vault through the floor below and find bank statements showing that Chapple stores his stolen money, over $30 million, in a Venezuelan bank. Abby takes cover as Reese and Shayn exchange fire with Chapple's mercenaries and eventually the two don banker's outfits from nearby lockers. Abby and Shayn escape into the bank lobby where Finch greets them with fake IDs that allows them to pass inspection and Fusco promises to cover for them. Abby and Shayn turn over the bank statements to Finch, asking if he can do anything with them. Finch promises to empty the accounts and deposit the money into reputable military charities, satisfying Abby and Shayn. Finch also promises to provide the couple with the cash and identities they need to get out of the state and start anew which they are happy with. (“Shadow Box”)