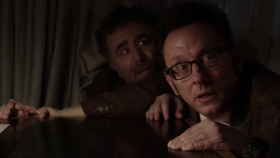 "Aletheia" is the 12th episode of season 3, and the 57th produced hour of Person of Interest. It originally aired on January 7, 2014.

Multiple enemies converge on the POI team as they protect a dying man whose number has come up. They struggle to keep their enemies at bay but without Reese, who has left them and their mission behind following the tragic war with HR, being down one man could have catastrophic repercussions for the team.

Aletheia (ἀλήθεια) is a Greek word meaning disclosure, lack of concealment or truth. It is associated with German philosopher Martin Heidegger's view of disclosure not as truth but as being open. As we see in the episode, the various characters have experiences which force them to be open, but not necessarily truthful, about events in the past and present. It is etymologically linked to Λήθη (Lethe).