View source
watch 01:36
We're Getting Mutants in the MCU - The Loop
Do you like this video?
Play Sound
Alicia M. Corwin 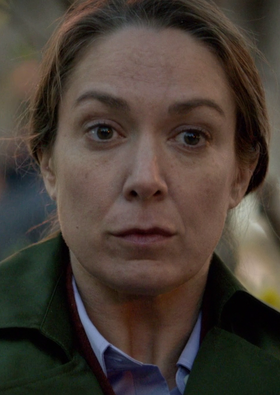 Alicia M. Corwin is the deputy Assistant to the President for National Security Affairs (APNSA) and one of the few to know of the Machine's existence.

Corwin met with Nathan Ingram to determine the progress of the Machine. Ingram gave her a social security number associated with a DIA agent.

Later, she introduced Ingram to Denton Weeks who told Ingram that the DIA agent was found to be a traitor. Weeks was curious as to how the Machine actually worked, and was unhappy when he was told that the Machine couldn't be used to track specific people. He threatened to reduce the payment for the Machine, but Corwin explained to him that Ingram was building it merely for one US dollar. (“Super”)

Alicia met with Nathan in a bar to discuss the transfer of the Machine to its new location. They discussed dissemination and she assured him that nobody would be able to track intel back to the Machine or to Ingram. Alicia reveals that only six people in the government know about the existence of the machine. Yet she was visibly shaken as she was evidently becoming more aware of the danger from the government to any person connected to the Machine. She told Nathan that she wold be happy to return to her day job once everything related to the Machine was settled. (“No Good Deed”)

Corwin was in Morocco, where she met with CIA agents Mark Snow, John Reese and Kara Stanton. She gave Reese and Stanton orders to retrieve a stolen laptop with secret software from Ordos, China. In reality, whether she knew it or not, the whole operation was nothing more than a smoke screen to check and make sure that an advance team had eliminated all the software engineers related to the code from The Machine that Finch had allowed to be stolen after he altered it so that the Machine would have the code to enable to defend itself by successfully moving itself independently to another location. (“Matsya Nyaya”)

After Ingram died, Finch blamed Corwin for Ingrams death, because Ingram positioned her as his friend. At first, Finch called her and warned that she will have pay for Ingram's death. After that Corwin tried to contact Special Counsel, but without any luck. Later Finch mounted an explosive to her vehicle and locked it when Corwin got inside her car. He called her once again and accused her in Ingrams death. Corwin denied all allegations, saying that she didn't know about the explosion. But she confesses that she was guilty in a way because she was aware early on the lengths which the government would go in order to protect the machine and had ignored the evidence in front of her eyes. Finch decided not to kill her. (“Karma”)

Later Corwin quit her job at the government and moved to Green Bank, a small town in West Virginia that doesn't have cell phones or wireless internet. (“Wolf and Cub”)

Will Ingram, eager to know what his father was working on before he died, tracked Alicia down and questioned her. During their conversation, Will referred to his "uncle Harold". Alicia seemed unnerved at the mention of his name and abruptly ended the conversation. She told Will nothing about her knowledge of the Machine. (“Wolf and Cub”)

Sometime after meeting with Will, Alicia was being contacted by a member of NSA, Henry Peck who was being attacked by government assassins trying to silence him about The Machine. Peck called Alicia numerous times trying to get information about "the machine" he was suspecting, Though they never met in person, Alicia spoke to Peck over the phone. Not answering any of his questions she only mentioned "Sibilance" and told him to "run". Apparently through following Peck, Alicia managed to listen in a conversation between Peck and Finch. She was visibly surprised when Finch told Peck that the machine existed and that he had built it. (“No Good Deed”)

Alicia succeeded in tracking down Harold and observed him leaving the Library. She broke into the building and discovered Finch's headquarters. Not realizing what exactly she was looking at, she seemed overwhelmed when seeing the Irrevelant list. (“Firewall”)

Alicia finally found Finch in his car waiting to pick-up John Reese and Caroline Turing. Climbing into his car and confronting him at gun point, she stated that Nathan was afraid and stressed about what they had built, and that he was killed by the machine. As guilt was starting to weigh down on her, she claimed she could feel it watching and listening to them at that moment. Alicia told Finch that she was tired of running.

Finch told her that she wasn't running from the machine, but she was running from people they had both trusted. Alicia said he was right, but that it was a good thing she found Finch first. Moments later, she was killed with a gunshot to the head by Root. She was later found dead at the meeting point by Reese. (“Firewall”)

Corwin's murder attracted much attention from different angles. Reese asked Carter and Fusco to look into the case and find out why Corwin was in New York. (“The Contingency”) Mark Snow also began an independent investigation under the coercion of Kara Stanton. (“Masquerade”) They all hit a dead end because, at the same time, Special Counsel and Denton Weeks conspired to corrupt the investigation when they feared that probing into Corwin's death might uncover their illegal activities. (“Bad Code”) Their operative, Hersh, managed to clean up the majority of the evidence, except for a few objects Fusco removed from her hotel room prior to his arrival. Hersh also removed an RFID chip from the right shoulder of Corwin's body. While searching through the things Fusco recovered from her hotel room, Carter found an RFID reader, further indicating that Corwin was aware of the chip. (“Masquerade”) Special Counsel later receives a report showing that the RFID chip was planted by Decima Technologies working out of Shanghai. Special Counsel tells Control that Corwin its believed that someone leaked a portion of the Machine's source code to Decima through the Ordos Laptop. Special Counsel adds his own belief that Decima is attempting to use that information to destroy the Machine. (“Zero Day”)