View source
watch 01:25
Jurassic World: Dominion Dominates Fandom Wikis - The Loop
Do you like this video?
Play Sound
All In 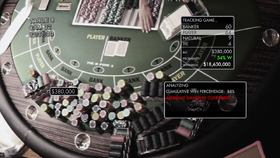 When an elderly gambler’s number comes up, Reese and Finch head to Atlantic City to delve beneath the surface of their POI’s seemingly ordinary life for answers. In New York, Carter’s crusade to clear a fellow detective’s name brings her perilously close to discovering the remaining HR faction within the department.

"All in" is a term used in poker when a player bets all the chips he/she has on their hand. It is often used when an individual or group has risked everything they have on the outcome of an event.

This episode is yet another that features Mr. Leon Tau who last appeared in Relevance. Leon is a favorite for his comedic and irreverent life view.