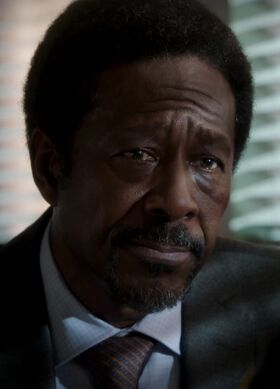 Alonzo D. Quinn is a political advisor for Ed Griffin and the leader of HR. Quinn's leadership was subtle enough that only Harold Finch suspected that HR still had someone in charge.

With many of his subordinates arrested by the FBI, Quinn tricks a local reporter, Maxine Angelis, into thinking that Christopher Zambrano is the head of HR. This results in Zambrano's death and Maxine's career destroyed. Quinn however leads his candidate Ed Griffin to an even greater victory by framing Landon Walker as the leader of HR and inadvertently restoring Maxine's career in the process. (“Bury the Lede”)

After the political victory, Quinn becomes Ed Griffin's chief of staff in the Mayor's Office. Quinn later asks his number two man, Officer Patrick Simmons, to try and reforge HR's alliance with Carl Elias by giving them Luciano Grifoni, the only survivor of the Mafia Don Massacre (“Flesh and Blood”). This, however does not go as planned when it turns out Grifoni is working with Elias now and has one of HR's subordinates killed, declaring that Elias is done with HR. (“C.O.D.”)

Quinn starts talking to his godson, Detective Cal Beecher, for some information with Simmons guarding him. Quinn meets with Simmons to inform him of his plans to make an alliance with Peter Yogorov. Since Elias refuses to work with them, Quinn decides to strike a deal with the Russian Mafia in order to secure funds for the rebuilding of HR. (“Shadow Box”)

Quinn meets with Peter Yogorov, who agrees to their partnership as long as Quinn could get him and his brother freed. HR then frames Detective Bill Szymanski to stop him from testifying against the Yogorovs. However Carter is able to clear his name and he gets out on bail. Quinn then meets with both Detective Szymanski and ADA Melinda Wright, claiming that the mayor wants him keeping up on the case.

Both Wright and Szymanski insist that they're not going to let the Yogorovs or HR stop them. Smiling, Quinn takes out a gun and shoots them both dead. He then calls in Detective Raymond Terney to make sure their cover-up story about a shooter is ready, and has Terney shoot him in the shoulder to make their story look convincing. (“All In”)

Quinn is possibly behind the maneuvering of people in prison around Elias; having several of Elias's men transferred elsewhere, and Peter Yogorov's moved into place.

Quinn meets Beecher one more time, who questions him about the tip regarding Szymanski's money. Quinn claims that one of Elias' men gave him the information. Curious, Beecher questions Elias and finds out that Szymanski was clean. Simmons, aware of this meeting, informs Quinn. Quinn says that it is unfortunate and that he had always told Beecher to be careful, but adds that his godson has to go. On duty that night, Beecher is set up by his CI and killed in a shootout on Quinn's orders. (“Trojan Horse”)

After the incident, Quinn is the one who gives the eulogy to Beecher at his funeral. (“In Extremis”)

When Carter starts looking into HR after Beecher's death, Quinn orders to have her killed. Although the plot to kill her is foiled, HR manages to frame Carter for shooting an unarmed suspect. (“Zero Day”)

Quinn then plans to take out Elias and his lieutenant (possibly Scarface) with the help of Peter Yogorov. The lieutenant is gunned down and taken to a hospital, but survives. Elias is taken to the woods by Terney and Yogorov, where they intend to get rid of him, but Carter is ultimately able to save his life. (“God Mode”)

Quinn later meets Carter while she is visiting Cal's grave. Carter compliments him for his eulogy at Beecher's funeral, and Quinn tells her that Elias' men were responsible for Cal's murder. She disagrees, telling him she's unsure.

She says her shift is starting, and Quinn says he doesn't want to keep her held up. Once she leaves, Quinn calls his associate and says that Carter may still be a problem. (“Nothing to Hide”)

Quinn meets with Carter at a diner, where they discuss Cal's murder and Carter's suspicion. Quinn says he can get the mayor involved, but Carter decides otherwise and leaves. Quinn gets a text message from Simmons asking if Carter will be a problem. He looks over his shoulder at her exiting a diner and considers the question.

Quinn later meets with Simmons at a construction site, and Mike Laskey, who has been following and spying on Simmons, takes pictures of the meeting. Later, he shows the pictures of the people Simmons met with to Carter, when Terney comes in. Terney kills Laskey and Carter shoots Terney, telling him to be a cop and tell her who the head of HR is. In his last moments, Terney places his finger on one of Laskey's photos, leaving a bloodstain on Quinn's image. (“The Perfect Mark”)

With Quinn exposed, Carter begins her quest to end HR once and for all. She starts by bluejacking Quinn's phone at a diner, where the two talk. Carter says that she is very sure HR is involved, and Quinn, saying that she's the most dedicated cop he's ever seen, offers her any help if necessary.

The Machine gives Finch Quinn's social security number along with those of the other remaining HR members he got earlier after Carter began her plan. Finch decodes the number and deduces the identity of the head of HR, as does Reese, who finds his picture on the bulletin board Carter has hid in the closet of her house.

Carter, armed with a sniper rifle, watches Quinn from a rooftop near his office building. Quinn is talking with Yogorov, who blames HR for his drug delivery gone bad. Quinn then calls Simmons to discuss the matter, saying that Yogorov would never be brave enough to go after HR. Right as he says so, Carter opens fire at the office, and both Quinn and Simmons suspect Yogorov of the assassination attempt. Quinn orders Simmons to have his men take out the Russians, and bring Yogorov to him.

Carter, who has taken Yogorov to remote custody, prepares an arrest warrant for Quinn. She calls judge Andrew Monahan to inform him about it. Monahan says he'll wait for her to arrive at his house, and then calls Quinn and asks if he knows Carter. Quinn tells Monahan to tell him everything Carter said.

Carter arrives at Monahan's house, where he takes her directly to Quinn, who is waiting there with Simmons and a few other HR members. Quinn tells Carter that he doesn't relish what happened to Beecher, but made the mistake of not killing her along with him so that "they both don't have to die alone".

Carter, who is being held at gunpoint, calmly admits that she shouldn't have gone after HR alone, so she "called some friends". She tells a shocked Quinn how she is still able to track his phone even when it's off. That's when Reese breaks in and shoots at the HR members.

Quinn is forcibly apprehended by Carter, who takes him outside. Another HR cop is waiting for them in his car, which Reese shoots at. Carter says that she plans to take Quinn into FBI custody. Simmons, meanwhile, accesses the car's camera and sees that it has a picture of Reese. He plans to send it to every cop and criminal in New York. (“Endgame”)

Quinn is taken around New York by Carter and Reese, and smashes Reese's cell phone early on to prevent them from communicating with Finch. They have to evade HR cops and other criminals, as there is a bounty on Reese's head. Quinn is sedated by Reese and hidden in a morgue while Reese defeats some HR members inside to help Carter escape. Carter finally takes Quinn to the FBI building, where he is formally arrested. As a result, 98% of HR is defeated with Simmons being the only remaining member, Carter is promoted back to detective. However, Simmons later kills her in a brief shootout, leaving him and Reese injured while he flees and Carter dies in Reese's arms. (“The Crossing”)

Meanwhile, Quinn is transferred to the US Marshal Service for protective custody. Reese, devastated after Carter's death, begins a brutal hunt for any information on Simmons' whereabouts. Realizing that Quinn is the only person who knows Simmons' exit strategy, Reese ambushes the hotel where Quinn is being held. After defeating a dozen US Marshals, he holds Quinn at gunpoint, demanding information on Simmons' getaway plan. Quinn refuses, saying that he will not betray Simmons' loyalty because of a death threat. Reese says he is not threatening. He will kill Quinn in 3 minutes if he gives him the information or not, but will make it as painful as possible if he doesn't.

Quinn writes some information on a piece of paper. After 3 minutes, Reese raises his gun to shoot, but Finch arrives before Reese can pull the trigger, telling Reese that killing Quinn in cold blood would go against Carter's intention to bring down HR legally. in spite of Finch's urging, Reese still tries to kill Quinn, but the gun does not fire. Reese then stumbles and falls due to blood loss from his prior injuries. While Fusco guards Quinn, Finch and Shaw take Reese back to the safehouse. Fusco later uses the information that Quinn wrote down to apprehend Simmons and Quinn remains in federal custody. In this way HR, the most powerful criminal organisation in the city, is finally destroyed. (“The Devil's Share”)

Retrieved from "https://personofinterest.fandom.com/wiki/Alonzo_Quinn?oldid=80924"
Community content is available under CC-BY-SA unless otherwise noted.