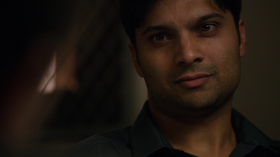 Amir Siddiq is a hitman who worked for the enigmatic criminal mastermind known as "The Voice."

Amir, while maintaining a cover as a Livery cab driver, works as a hitman for the enigmatic criminal mastermind known as "The Voice." Under "the Voice's" employ, Amir kills at least five of his former associates, but realizes that "the Voice" will eventually see him as a loose end as well and kill him too. After doing some digging, Amir discovers that "the Voice" hires people through three different shell companies with the same PO box. By following the courier, Amir is able to discover "the Voice's" true identity, something he feels he might need someday.

Amir is eventually arrested for possession of an unregistered weapon which is eventually linked to an unsolved murder from two years before by a ballistics test. After Amir is linked to the murder, one of his hits for "the Voice", the case is handed over to Fusco who Amir pretends to be a mild-mannered cab driver to who is confused by his continued arrest. Fusco informs Amir that the gun he was arrested is connected to a murder and Amir claims he bought it six months ago at a gun show in Cleveland due to being robbed, paid in cash and lost the reciept. Apparently buying it, Fusco leaves to check out his story.

Fusco later returns after having run the ballistics on Amir's gun through the federal database to find that its linked to four other murders in four other states. While Amir claims the gun's previous owner must've been the killer, Fusco tells him the murders have occured within the last six months, the period of time that Amir said he owned the gun. His fingerprints are also a partial match to one of the murders which occured on the night of the gun show and a composite witness sketch of the killer matches him. Realizing he's caught, Amir drops the act and admits Fusco isn't as dumb as he looks and refuses to talk more until he can see the DA. Fusco doesn't believe Amir will get a deal and plans to get a warrant to get Amir's car tested for carpet fibers and then to send him to Rikers Island. Amir just smirks at Fusco who is stunned that such an ordinary seeming man is an apparent serial killer. Fusco then locks Amir in the precinct's solitary confinment cells.

That night, the Templarios take over the precinct in an attempt to reach and kill Amir. Fusco and Reese prevent two Templarios from breaking into the cell and question why someone wants Amir dead and if its connected to the murders he committed. Amir tells them that the murders he committed were hits for his former employer who Reese realizes is "the Voice." Amir explains how his targets were all people who previously worked for "the Voice" or loose ends to the man and how he was able to discover "the Voice's" true identity. Reese realizes that "the Voice" knew Amir would turn on him as soon as he was arrested and hired the Templarios to kill Amir in response. Amir offers to give up "the Voice" once they get him a deal in writing and Reese orders Fusco to get Amir to the bullpen and to call for backup while he gets Easton.

At the bullpen, Fusco locks Amir in an interogation room where Officer Chen attempts to kill Amir before being stopped by Reese. As he waits in the room as Reese and Fusco fight the Templarios, Terry Easton enters and Amir is shocked to recognize him as "the Voice." Easton questions if Amir really thought he could betray him and live to tell about it and responds to Amir's questioning of how he got in with "cleanliness is all." Easton then shoots Amir in the head, killing him. His body is later found by Reese.

Retrieved from "https://personofinterest.fandom.com/wiki/Amir_Siddiq?oldid=81153"
Community content is available under CC-BY-SA unless otherwise noted.