Person of Interest Wiki
Register
Don't have an account?
Sign In
Advertisement
in: Characters, Persons of Interest, Jurists, Female Characters 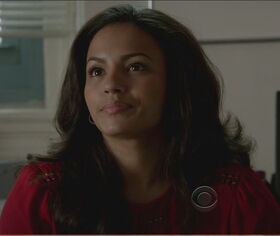 Andrea was born and raised in the Queen's section of New York City where she accrued a juvenile record for breaking and entering. Having been given a second chance, she went to college and received her law degree from Queen's College.  She was a partner in the small law firm of Smith and Guitterez where she specialized in representing prisoners with grievances against the state pertaining to their treatment while incarcerated. King was her seventh client and she had lost all her other cases before his.

Andrea is single, although she did admit to Reese that she had once dated an ex-con client. She used the dating site www.MatchHeart.com looking for her perfect man.

Andrea was representing Terrence King who had been arrested for a parole violation when she became a POI. She reached out to a friend of hers named Chris Scollard who worked at DFS for help locating evidence that may have cleared King. Unbeknown to her, King was framed by his parole officer Dominic Galuska. She was targeted for death by Galuska and Scollard, who were running a foster child scam and wanted to prevent her from discovering it.

Galuska hired two of his parolees to kill Andrea, however Reese was able to intervene and save her life. After Reese framed Galuska, Finch was able to find evidence of the scam on his computer. Unaware of Scollards' involvement in the scam, Andrea visited him afer hours seeking help for King. Scollard, needing to protect his scam, pulled a gun and led Andrea into the basement where he intended to kill her but she pulled out a baton and struck him with it allowing her to hide. Before Scollard could shoot her, Reese appeared and shot him.

Andrea was able to free King due to Galuska's misconduct and successfully sued the state for $10 million damages, but more importantly for her, reunited him with his son. Further, the victory served to fulfill her desire to represent an honest man.