View source
watch 01:36
We're Getting Mutants in the MCU - The Loop
Do you like this video?
Play Sound
Andrew Benton 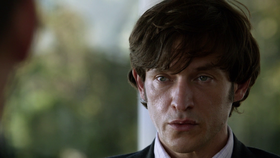 Andrew William Benton is a serial rapist who was stalked by Megan Tillman after raping her sister, which led to her death.

Benton drugged and raped Gabrielle Tillman in college. Gabrielle delayed filing charges until two days later out of shame, and the physical evidence was inconclusive due to the delay. One year later she killed herself with a drug overdose. To get justice for her sister, Megan decided to kill Benton.

Megan abducted him and planned to kill him but was stopped by Reese. He convinced her to let him take care of Benton, after which Benton woke up in front of John, who had a gun on the table between them. John talked about whether people could change or not and Andrew insisted that he could change, though he most likely was just pleading for his own life. John's last words were "Come on, Andrew, help me make a good decision." The episode ends with Benton's ultimate fate being left unknown.