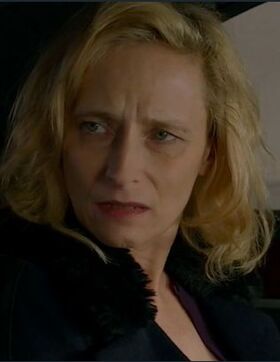 Anja Kohl is the widow of Ulrich Kohl and the mother of Marie Kohl. Anja worked as a secretary for the East German Stasi security service. She faked her own death in 1987 by staging a car accident and defected to America to get away from her husband who was a ruthless Stasi agent, although she still loved him.

Finch was able to coerce Pilcher in order to get a copy of the accident report for Anja's car accident.

Ulrich Kohl came to NYC to kill the members of his former Stasi team who he blamed for Anja's death. Before shooting and torturing Heinrich Hauffe Ulrich showed him a photo of Anja. After publicly poisoning the team's former forger, Wernick, Ulrich asked him if he remembered Anja. Ulrich tracked down the team's former leader Steiler who called Anja and put her on the phone with a stunned Ulrich.

Reese and Finch found Anja before Ulrich could and protected her with the help of Fusco. Anja introduced Marie Kohl to her father, who she had believed to be dead. Anja begged Ulrich to forgive her. Moments later, an emotional Ulrich makes a sudden move to shoot Anja forcing Reese to fatally shoot him first. Reese later discovers that Ullrich's gun was empty and he had wanted Reese to shoot him.

Anja always told her daughter that her father was a soldier who died a hero for his country.

Retrieved from "https://personofinterest.fandom.com/wiki/Anja_Kohl?oldid=44825"
Community content is available under CC-BY-SA unless otherwise noted.