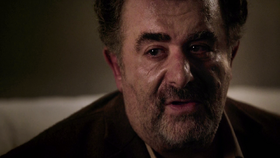 Arthur Thomas Claypool is a former software engineer for the NSA, and an MIT classmate and old friend of Harold Finch and Nathan Ingram. He suffers from memory loss due to a brain tumor.

Arthur was responsible for a project codenamed "Samaritan", which entailed the creation of a mass surveillance system similar to the Machine for the government. In 2005, Congress canceled the project just weeks before Arthur was able to make it work.

The Machine declares Arthur as the next POI, but it's Root who somehow receives his number after Finch begins to ignore the Machine's phone calls. Finch has Sameen Shaw pose as a doctor to spy on Arthur. Arthur's wife Diane comes to visit him, but due to his memory loss symptoms, he does not recognize her.

The organization Vigilance targets Arthur in order to learn his secrets, but Shaw and Finch are able to escape the hospital with Arthur and his wife. At a hotel, Finch and Arthur happily reunite and talk about their times at MIT, and Arthur begins to explain the history of Samaritan. After Arthur repeatedly mentions the creation of the Machine in an indirect fashion, Finch talks with Shaw about it. Here, Arthur experiences another attack of memory loss, and Finch reminds him that he is Harold and Diane is his wife. Arthur suddenly remembers that Diane is in fact dead and that he buried her two years ago. That's when "Diane" orders a team led by Hersh to come in and Finch, Shaw and Arthur are all held at gunpoint. Diane reveals herself to be Control, and aims a gun at Finch and Arthur. She says that Samaritan is still active and demands to know where it is. She then informs Finch that she wants the location of his system as well. She coldly declares that whoever gives her the location of their Machine first will leave the room alive. (“Lethe”)

Control continues to question Finch and Arthur about Samaritan. Arthur tries hard to remember but is unable to, and Control orders her three hostages executed. Root bursts into the room, armed with two guns, and fires at Control and her men, allowing Arthur, Finch and Shaw to escape. Root is shot in the arm by Hersh and captured.

Following their escape, the trio head to a bank where Arthur reveals he has stored Samaritan's drives, having faked memory loss earlier to hide the fact that he was lying to Control. Inside, Arthur crushes his medical medallion and takes a key out from inside, identifying himself as Rudiger Smoot, an old nickname to the bank manager, and heads to the vault with Finch while Shaw stays outside.

In the vault, Arthur shows Finch Samaritan's drives. Meanwhile, Vigilance soldiers, led by Peter Collier, attack the bank and head to the vault. Hersh and his team also arrive posing as SWAT and Shaw knows she's unable to take down both teams.

Finch closes the vault door and stays inside with Arthur before Collier can come in. The bank manager is shot in the leg by Collier, and after tending to her wounds, Finch and Arthur talk about Samaritan, and Arthur comes to realize that Samaritan is still active.

Collier calls Finch and tells him that his men will blow the vault open if he does not come out himself. With both Vigilance and Hersh after Samaritan, Finch tries to persuade Arthur to destroy it, but Arthur views his creation like his own child, and is unable to abandon it. Finch finally reveals that he and Nathan Ingram did in fact build the Machine, and that they've been saving lives with it. Arthur is fascinated, but still can't say goodbye to Samaritan. Finch tells Arthur that their enemies will use his creation to enslave others and asks Arthur if that is what he wants for Samaritan, and Arthur finally convinces himself to destroy the drives.

Collier prepares to detonate the vault, and Shaw explains that she has created a pipe bomb that will trigger along with Collier's bombs, blowing open a sewer entrance that will allow them to escape. Though Finch warns that the plan is reckless, Shaw says it's their only option, and Collier detonates the vault. Hersh, meanwhile, sends his men in and they kill several Vigilance members. Shaw escorts Finch and Arthur out of the vault, only to be caught by Collier and his remaining men.

Arthur tells Collier that he destroyed Samaritan's drives, but Collier figures that having Arthur is sufficient enough. He orders his men to kill Finch and Shaw, but the men are shot down by SWAT officers. The two officers reveal themselves to be Reese and Fusco.

After the incident at the bank, Finch moves Arthur to a hospital bed in his safe house. Arthur tells Finch that he lost more memories about his wife and he has little time left. Then, Finch gets a call from Root, who has escaped from Control. Root says that the bank manager they were with at the vault is an impostor and that the real one was murdered prior to their arrival.

As Finch wonders who the woman is then, Root asks him to hand the phone to Arthur. Root tells Arthur that the Machine has something for him to send him on his way. The Machine then plays a slideshow of videos and pictures highlighting Arthur's best times with his wife and Finch. Both Arthur and Finch are left speechless.

The fake bank manager is revealed to be an operative of Decima Technologies, having stolen the real Samaritan drives. (“Aletheia”)

While infiltrating Fort Meade to destroy Samaritan with the ICE-9 computer virus, Finch tells John Greer that Arthur had intended Samaritan for good but Greer had corrupted it for evil. (“.exe”)

Retrieved from "https://personofinterest.fandom.com/wiki/Arthur_Claypool?oldid=81122"
Community content is available under CC-BY-SA unless otherwise noted.