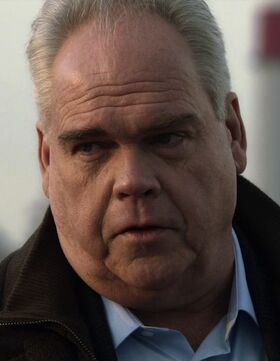 Captain Arthur "Artie" Lynch was a corrupt police captain, and a leading member of HR.

Elias orders Lynch to kill Joss Carter, but to make it look clean. Fusco meets with Lynch, who states that Carter has to be "removed" as she does not work with HR. However, Reese later forces Lynch to deliver a message to Elias to "back away from Carter or else Reese would kill him" and successfully delivered Elias that message. (“Get Carter”)

A man named Andre Wilcox, who was receiving protection from HR, not Elias, met with Lynch to arrange for the release of one of his men named Brick from jail. Despite being reluctant, Lynch agreed to do what Andre wanted. He met with Captain Womack, the head of the precinct where Brick was being held, and asked him to release Brick, which Womack did as he was a part of HR. (“Wolf and Cub”)

Lynch is seen with Fusco shaking down mobsters for protection money now that Elias is no longer working with HR. Lynch comes to Fusco and tells him about a job. Lynch wants Fusco to pick up platinum in Brooklyn and staes that failure is not an option. When Fusco returns without it, Lynch assumes Fusco stole it, but Fusco tells him he did not and suggests they look at the mobster's associate Tommy Clay, who actually stole the platinum for himself. Meanwhile, Reese finds Tommy and realizes that Tommy is not only the perpetrator, but the victim. Tommy's girlfriend Ashley promptly shoots Tommy in the back, but cannot bring herself to kill Reese. As she leaves, she's shot and killed by Lynch. Lynch asks if the platinum is all there and Fusco tells him it is. He remarks that Fusco was telling the truth and proceeds to beat Reese with the butt of his gun as payback for hanging him over the roof back in “Get Carter”. Fusco tells him there is no time for that, and Lynch decides Fusco's right and proceeds to kill Reese. When Lynch is about shoot Reese, Fusco shoots him dead with Ashley's gun. (“Matsya Nyaya”)