View source
watch 01:36
We're Getting Mutants in the MCU - The Loop
Do you like this video?
Play Sound
Asylum 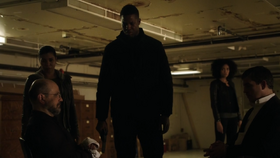 Reese and Fusco get caught in the war between the two newest POIs, rival crime bosses Elias and Dominic. Also, a tantalizing clue to Shaw’s whereabouts leads Finch and Root into a possible trap, and Control goes rogue to uncover the true intentions of the Samaritan program.

An asylum is a place of rest or refuge, either spiritual or political. It is also an out-dated name for a facility treating mental illness, such as the hospital where Samaritan had its base of operations.