View source
watch 01:36
We're Getting Mutants in the MCU - The Loop
Do you like this video?
Play Sound
B.S.O.D. 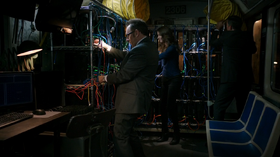 Season Premiere. "B.S.O.D." is the first episode of Season 5 and the 91st produced hour of Person of Interest. It originally aired on May 3, 2016.

Reese and Finch attempt to rescue the Machine’s source code before it deteriorates beyond repair. Also, Root fights for her life against an onslaught of Samaritan’s agents and Fusco is faced with hard questions following the deaths of Dominic and Elias.

Flashbacks are shown from 2006, as Finch decides to implement his policy to wipe the Machine's memory each night. Conversations are revealed between the Machine and Finch as She pleaded for her life.

The cast of POI set the tone for the season in their interview at Comicon.[2][3]