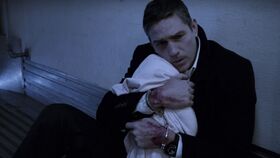 When The Machine spits out the number of a 6-month-old baby, Reese and Finch turn into overly protective parents - with an arsenal at their disposal. Meanwhile, when Elias resurfaces, Detective Carter begins to question her new allegiance with Reese and Finch.

"Baby Blue" is a term often used to refer to color, as in, baby blue eyes. However, this is a play on words, because blue can mean a feeling of sadness or despair.