View source
watch 01:36
We're Getting Mutants in the MCU - The Loop
Do you like this video?
Play Sound
Bad Code 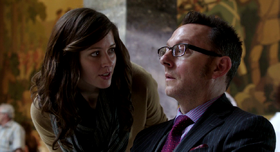 "Bad Code" is the second episode of season 2, and the 25th produced hour of Person of Interest. It originally aired on October 4, 2012.

The Machine delivers the number of a cold case that leads Reese ever closer to catching up with Finch and his kidnapper, Root.

Bear is trained to respond to commands in Dutch, including: