Person of Interest Wiki
Register
Don't have an account?
Sign In
Advertisement
in: Characters, Female Characters, Minor Characters,
and 2 more 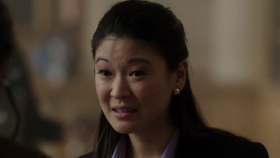 The bank manager is an operative of Decima Technologies who posed as a bank manager at a vault where the drives of Samaritan were being stored. After murdering Karen Wallace, the real bank manager, the operative replaced the real Samaritan drives with fake ones before taking the real drives for Decima.

During the raid on the bank by Vigilance, Harold Finch and Arthur Claypool, the creator of Samaritan, came to the bank to find it, and Finch convinced Claypool to destroy the drives to ensure that Vigilance didn't get their hands on it. During this time, the "bank manager" was shot in the leg by Peter Collier. Finch and Claypool briefly helped sustain her injuries before escaping.

Later, Root informed Finch that the body of the bank manager was found earlier prior to their arrival, making Finch wonder who was in the bank with them.

The operative brought Samaritan's drives to Greer, who thanked her before shooting her dead to cover his trail. He plans to use Samaritan for Decima's own needs.