View source
watch 01:36
We're Getting Mutants in the MCU - The Loop
Do you like this video?
Play Sound
Bear 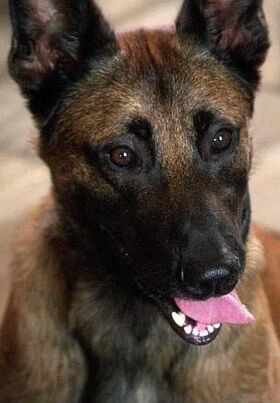 Bear is a Belgian Malinois adopted by John Reese. A trained military dog, he responds only to Dutch commands.

Reese first encounters Bear as an attack dog, then named Butcher, who was owned by Byron, an Aryan Nationalist. Byron took him from his previous owner because he did not have the money to pay a debt he owed the group.

When Leon Tao is captured by Byron and the Aryan Nation after he embezzled about $8,000,000 from them, Reese rescued him. Realizing Bear was previously a military dog, Reese befriends the dog using the familiar Dutch command he had heard while in the military, turning him against Byron. With Leon rescued, Reese takes Bear with him.

Reese gives Bear his new name because he ate the bearer bonds Leon had stolen while waiting in the car for Reese and Leon to return (“The Contingency”).

After getting Bear, Reese leaves him in the care of Fusco while he tries to solve the mystery of Hanna Frey and rescue Finch. Fusco brings Bear to the police station where he tries to learn Dutch commands to little avail and humorous results. Hersh witnesses this and thinks that Fusco is no threat due to his inability to train Bear. Fusco later takes Bear with him on surveillance of Hersh and is excited when a forced pairing works, jokingly asking Bear how to celebrate in Dutch (“Bad Code”).

After Finch's rescue, Bear moves into the Library; Reese claims his apartment building has a strict policy regarding dogs, although he would later be taken there as part of Reese's cover in “Bury the Lede”. Bear also displays a keen interest in rare first edition books, bringing one to Finch in his mouth, much to Finch's dismay (“Bad Code”).

Finch seems frustrated that Reese brought Bear to the Library and complains about looking after him at the expense of his books, especially the leather-bound ones, including an atlas of Patagonia and a first-edition Gatsby (“Terra Incognita”).

At first, Finch does not seem pleased to have Bear with him until Bear helps him to recover from PTSD symptoms Finch develops after Root abducted him. Soon after, Finch begins to play with Bear and gradually warms up to him (“Masquerade”). Finch later buys Bear a squeaky toy that brings him great frustration during a case where he also uses Bear to help Reese get close to Maxine Angelis (“Bury the Lede”).

As part of their cover while watching Graham Wyler, Reese and Zoe Morgan bring Bear with them as their dog when they move into a suburban house. Zoe, who is posing as Reese's wife, jokes about custody of Bear once they inevitably "divorce" (“The High Road”).

Despite living in the Library with Finch, Bear becomes very attached to Reese and misses him when Reese is incarcerated at Rikers Island. While there, Reese encounters Bear's former owner Byron who is not pleased to see Reese due to Reese taking Bear from him (“Prisoner's Dilemma”). Although Finch allows him to snuggle with one of Reese's jackets (“Prisoner's Dilemma”). Even after his return, he remained disheartened, and Finch was very concerned until he finally realizes that Bear needs a friend of his own, so he and Reese took him out in the park to play with other dogs. (“One Percent”)

Bear and Leon meet again after Reese saves Leon from new trouble and lets him stay in the Library while pursuing a new number (“Critical”). At first, Leon is suspicious of Bear but soon becomes very good friends with him. When Leon finds himself in trouble for the third time, Bear helps him by fighting off Nigerian fraudsters in a hotel room. He was happy to see Leon again, licking his face as Reese frees him (“All In”). When Finch and Reese go looking for the Machine, Bear stayed with Leon (“God Mode”).

Bear meets Sameen Shaw in an ambulance and greets her by licking her face after Finch and Reese (with the help of Leon Tao, who posed as an EMT) saved her from being killed by Hersh (“Relevance”). Shaw becomes very fond of Bear and buys him a metal studded collar (“Lady Killer”). She states on multiple occasions that Bear is the best thing about Contingency operations (“Zero Day”) (“Razgovor”) (“The Cold War”). Fusco tells Shaw that Bear is the only one on the team that likes her (“The Crossing”). When Shaw goes missing, Bear clearly misses her (“M.I.A.”).

Bear often accompanies Reese and Finch, using his skills as a military dog to help them out in the field. When meeting with hacker Demon8, Finch brings Bear along, using Bear to intimidate one of the men in a Korean bar protecting Demon8. When Irina Kapp showed up, she ordered Bear killed first. In the fight that followed, Finch released Bear upon an Estonian mobster about to shoot Reese and Bear bit into his arm and took the man down (“C.O.D.”). When Monica Jacobs' number came up, Bear assists the team by diverting Rylatech's security team by wearing Monica Jacobs' RFID card to catch the team off-guard and chase them into an office, keeping them contained while Monica, Reese, and Finch unraveled Rylatech's secret connection with Decima (“Trojan Horse”).

Bear plays an important part in Carter's mission to help Detective Fusco deal with his past when an anonymous tip regarding Fusco's former corruption and the disappearance of Detective Stills was sent to IAB. With Carter's guidance, Bear helps her track down and move Stills' corpse (“In Extremis”).

When Wayne Kruger knocks out Finch with a vase while Finch is guarding him in the safe house, Bear attacks Kruger to protect Finch, although Kruger gets away (“Nothing to Hide”).

In order to save another number, Bear pretends to be sick so that Finch and Reese can protect a vet named Dr. Rachel Jensen who is threatened by four armed youths intent on stealing ketamine. Reese shoots three of the would-be thieves, but Bear catches the fourth, who held Dr. Jensen at gunpoint (“Reasonable Doubt”).

When Root is kept in the Library, Bear seems to get used to her company (“The Devil's Share”). Later, when Root is going after Greer, she loses track of him due to his counter-surveillance tactics. To avoid failing again, she decides to bring Bear with the ability to track people with the sense of smell along and eventually manages to track Greer (“Allegiance”).

When Vigilance kidnaps Finch and the blackout begins, Root sends Bear to Fusco with instructions on where to meet Reese and Hersh. Bear accompanies the two on their quest to save Finch, helping them take down a Vigilance operative they trick into giving up the organization's location. When Reese gets caught in a gunfight with Decima agents, Bear helps him by bringing him a gun from one of the fallen agents. Bear then assists in the rescue of Finch by attacking a Decima agent, helping to buy time for Reese to escape with Finch. When the Team splits up into their new lives, Bear accompanies Finch (“Deus Ex Machina”).

Bear stays with Finch, who is hiding as Professor Whistler, for a while, but due to a rule about having dogs on the university campus, he is passed over to John, who is hiding as Detective Riley (“Panopticon”). Bear moves into the Subway when Finch gets it up and running (“Nautilus”). Once, Bear chews many of the papers that Finch was going to grade for his students, which Reese mocks that Finch had better tell them that the "dog ate their homework" (“Brotherhood”).

Shaw takes Bear with her to find Fusco and Andre Cooper and he distracts an armed perp for Shaw to apprehend (“Wingman”). Bear assists Fusco by pretending to be a police dog and sniffing drugs in a woman's purse. (“Honor Among Thieves”)

When The Machine attempts to decompress too early and sets fire to the station, Bear wakes up the unconscious Finch and retrieves a fire extinguisher for him to use (“B.S.O.D.”). Finch later takes Bear to the safehouse where he keeps the recovering Elias company (“ShotSeeker”).

When in a hospital experiencing a deadly viral outbreak, Finch brings Bear with him under the guise of a therapy dog. After being cornered at gunpoint by the corrupt hospital administrator, Finch is given instructions from Root, one of which is a Dutch command for Bear. Giving the command, Finch releases Bear upon the administrator and Bear disarms the man (“Reassortment”).

After returning to the Subway for the first time since Finch disappeared, Reese and Shaw are greeted by Bear who is the only one there. Bear is excited to see Shaw who pets the dog before moving on (“.exe”).

Following Samaritan's destruction, Bear ends up in the care of Fusco as Finch is believed to be dead. After meeting with Fusco, Shaw takes Bear who she now calls her dog and they walk through the streets of New York together before getting a call from the Machine with a new number (“return 0”).