Person of Interest Wiki
Register
Don't have an account?
Sign In
Advertisement
in: Characters, Detectives, Recurring Characters,
and 5 more

View source
watch 01:36
We're Getting Mutants in the MCU - The Loop
Do you like this video?
Play Sound
Detective Bill Szymanski 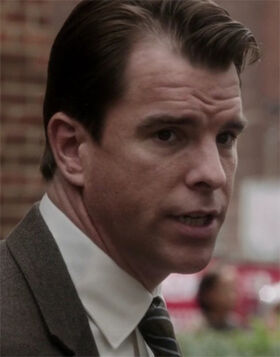 Detective Bill Szymanski was a detective in the organized crime division at the NYPD 8th Precinct who assisted Joss Carter with cases involving mob families.

Szymanski first appeared investigating the murder of Benny D’Agostino at a bodega who was the prime suspect in a series of murders of Russian mobsters. He helps Carter and Fusco investigate the case by interviewing his widow Patti D’Agostino where she reveals Carl Elias' intentions to avenge his murder. Later a call comes in about a shootout involving the Russians and a witness named Charlie Burton who was present during Benny's murder. They eventually capture Peter and Laszlo Yogorov only to realize that Charlie is the mob boss Elias. (“Witness”)

As he was an honest cop, Carter entrusted him with the job of guarding Gianni Moretti, Elias' father. Ultimately, Reese revealed Moretti's location to Elias in order to save a person of interest, and Szymanski was severely injured in the line of duty and taken to the hospital. (“Baby Blue”) Fortunately, he survived. (“Identity Crisis”)

Szymanski fully recovered and went back to active duty where he worked on the investigation of the murder of George Massey's son, who was killed by Riley Cavanaugh. (“Triggerman”)

After being asked by Finch about Lou Mitchell, Carter has Szymanski look into his past. Szymanski explains Lou's criminal history and notes that the area Lou used to work contains the Venus Casino run by Dario Makris who is under investigation by the narcotics division.

In order to make a deal with Peter Yogorov for backing from the Russian Mafia, HR frames Szymanski as a dirty cop to discredit his testimony by planting money on him, buying a condo in his name in Florida and opening a Cayman Island bank account for him and then having one of Cal Beecher's CIs tip him off. However, Carter refuses to believe Szymanski is dirty and on a suggestion from Fusco, follows the money found in Szymanski's apartment. Carter discovers the marked bills had been placed by the FBI in a bodega run by Elias that had been raided by the NYPD six days later. The marked bills had never showed up in evidence and Carter suggests that a dirty cop stole them which gave HR the perfect way to frame a good cop. With this new evidence, Szymanski can be released on bail by the end of the day and testify against the Yogorovs while also getting IAB off his back.

After Szymanski's death, Finch visits Elias in prison who tells him that Szymanski and Wright's murders benefited his enemy, Peter Yogorov. Carter becomes suspicious that Beecher is corrupt and a member of HR given the timing, leading Fusco to confront Beecher. Beecher, rattled visits Quinn who gave him the tip and Quinn eventually claims that one of Elias' soldiers told him about Szymanski being corrupt. To find out the truth, Beecher visits Elias to find out if Szymanski had been working for him. Elias raises questions about who could've been powerful enough to frame Szymanski and finally tells Beecher that Szymanski was in fact a clean cop. Elias had once tried to bribe him, but Szymanski threw the money back in his face. As a result, after realizing that Beecher is getting too close to the truth, Quinn has him killed too while Fusco is able to clear Beecher's name to Carter by using a forced pairing of Beecher's phone to record the conversation for her. (“Trojan Horse”)