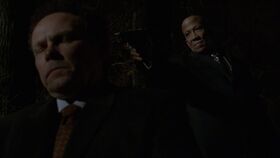 Reese discovers there's more to the story after he infiltrates a smuggling ring to get close to his latest POI.

Retrieved from "https://personofinterest.fandom.com/wiki/Blue_Code?oldid=80697"
Community content is available under CC-BY-SA unless otherwise noted.