View source
watch 01:36
We're Getting Mutants in the MCU - The Loop
Do you like this video?
Play Sound
Blunt 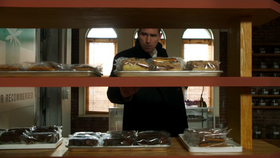 Blunt is the 16th episode of season 4, and the 84th produced hour of Person of Interest. It originally aired on February 24, 2015.

Reese and Finch must protect Harper, a street-smart grifter, when her plan to steal cash from a medical marijuana dispensary goes up in smoke.

Blunt refers to street term for marijuana stuffed inside a small, hollowed out cigar or cigarillo. It also refers to statements which are very direct and to-the-point; a number of characters in the episode bluntly express thoughts or ideas.