View source
watch 01:36
We're Getting Mutants in the MCU - The Loop
Do you like this video?
Play Sound
Booked Solid 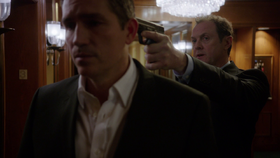 "Booked Solid" is the 15th episode of season 2, and the 38th produced hour of Person of Interest. It originally aired on February 14, 2013

Reese and Finch race to save a hotel maid's life but find themselves surrounded by more suspects than they may be able to eliminate when they realize any guest or staff member could be her potential killer. Meanwhile, Detective Carter weighs a major offer from the FBI.

Booked Solid is the term used to describe a hotel or restaurant that has no reservations available for the time or date requested.