View source
watch 01:36
We're Getting Mutants in the MCU - The Loop
Do you like this video?
Play Sound

For the criminal gang, see The Brotherhood. 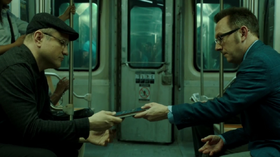 ""Brotherhood" is the fourth episode of season 4, and the 72nd produced hour of Person of Interest. It originally aired on October 14, 2014.

Reese's cover job as a detective at the NYPD becomes complicated when the young brother and sister he's protecting become targets of a gang investigation.

While the title refers ostensibly to the name of the gang in the story arc, it also serves to describe the relationship and the bond that has been created between Harold and Elias.