Person of Interest Wiki
Register
Don't have an account?
Sign In
Advertisement
in: Characters, Recurring Characters, Detectives,
and 6 more

View source
watch 01:36
We're Getting Mutants in the MCU - The Loop
Do you like this video?
Play Sound
Detective Calvin T. Beecher 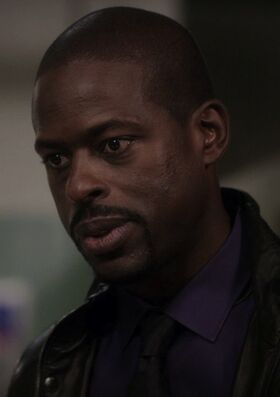 Detective Calvin T. "Cal" Beecher was an NYPD narcotics detective who worked in the 8th Precinct.

Beecher helped Carter with the Drake case. He later asked Carter out on a date when she said that she owed him a favor for helping her with the case. She agreed to go out with him. (“Til Death”)

Beecher is Alonzo Quinn's godson and he gave his godfather some information regarding a case. After seeing Beecher point towards James Stills and by extension, Fusco, for the murder of Ian Davidson, Fusco became suspicious of Beecher and followed him to his meeting with Quinn. Fusco used a forced pairing of Beecher's phone to listen in to their conversation before being interrupted by Simmons. The fact that Simmons was watching over Beecher's meeting drew Fusco's suspicions as to the reason for his presence however. (“Shadow Box”)

Later, when Carter received a job offer with the FBI pending a polygraph, she was turned down because of her relationship with Beecher. FBI agent Brian Moss told her that Beecher is currently under investigation. (“Booked Solid”)

He helped Carter in investigating the case of a prolific serial killer. Despite her suspicions and them not trusting each other, both of them ended up working together and saving Finch from being killed, with Beecher finally shooting and killing the elusive serial killer. (“Proteus”)

After the events of Owen Island, Carter was still distant from Beecher. When Detective Bill Szymanski was arrested on a tip from someone in Narcotics, Carter asked Beecher who it was. Beecher admitted it was him and that he got the tip from his CI, but he refused to divulge his name. Upset, Carter walked away from him. She then asked Fusco about Beecher, who warned her that HR isn't gone, but admits that he doesn't have anything on Beecher. (“All In”)

Later, Fusco confronted Beecher in the bathroom at the police station, asking him who his CI was. Detective Terney then entered and broke them up. Following his encounter with Fusco, Beecher met with Quinn at Central Park and asked him who the CI was. Quinn told him it was one of Elias' men, but he didn't disclose the man's name. Curious, Beecher arranged a meeting with Elias and asked him about the validity of what Quinn had told him. Elias then said that Szymanski was clean and that Beecher had been played by HR. Unknown to them both, Fusco had followed Beecher and used his previous forced pairing of Beecher's phone to record the conversation. Fusco later played it back to Carter, showing her that Beecher was in fact innocent and Carter called Beecher and set up a time to have drinks together and talk.

Officer Simmons found out about Beecher's meeting with Elias, and he discussed future plans with Quinn. Quinn told Simmons that he always told Beecher to be careful, and that Beecher had to go. On the evening of April 5, 2013, Beecher was set up by his CI and killed in a shootout orchestrated by HR and sanctioned by his godfather. The Machine produced his number too late because of the virus uploaded by Kara Stanton (“Dead Reckoning”), and they were unable to save him. (“Trojan Horse”)

Following Beecher's murder, Carter works to solve it, knowing that HR had a hand in the murder. Raymond Terney offers Carter any help he can in catching Beecher's killer as does Reese who recognizes that Beecher was a good man. Unknown to Carter, Terney is an HR cop and his offer is a trick. As Carter continues to investigate Beecher's murder, Terney is ordered to assassinate her to keep Carter from discovering the truth. Terney leads Carter to the house of the man who supposedly killed Beecher and prepares to shoot her in the back. However, the attempt is foiled when the supposed killer emerges with a gun and Carter kills him in self-defense. In response, HR frames her so it looks like she's a cold blooded murderer. Terney later reveals his true colors to Carter, threatening to kill her, Fusco and her son if she doesn't drop the case and let herself be framed, confirming to her in the process that HR murdered Beecher. (“Zero Day”) (“God Mode”)

Carter visits Beecher's grave to leave flowers and meets with Quinn. Quinn tells her that he has heard that some of Elias' men murdered Beecher, but Carter admits she thinks there's more to it than that and leaves after getting a call. Quinn then calls someone and tells them that they still have a problem with Carter. Carter contacts Fusco to ask about the investigation into Beecher's murder but Fusco hasn't heard anything new and only reluctantly agrees to access the file to see what's been found. To both of their surprise, the file into Beecher's murder has been restricted and Fusco suggests that HR did it because of "too many prying eyes." (“Nothing to Hide”)

After seeing Carter with Reese, Mike Laskey suggests that Reese is Carter's new boyfriend and tells her its good she's moving on from Beecher. (“Reasonable Doubt”) After Reese catches her running surveillance on HR through Raymond Terney's phone, he suggests that she use the evidence she has gathered that can implicate half of HR to make deals that will turn that half of HR on the other half. However, Carter tells Reese that Donnelly did that and missed HR's boss which allowed HR to rebuild itself from the ashes. Carter tells Reese that if Donnelly had gotten HR's boss, Beecher likely wouldn't have lost his life. As a result, she is determined not to make the same mistake by identifying HR's boss before making her move. (“Razgovor”) Carter later meets with Quinn at a diner where Quinn asks if she has learned anything more about Beecher's murder. Not realizing that Quinn is the head of HR, Carter tells Quinn she followed a few leads but Beecher's file was sealed and she suspects HR is involved. Carter leaves as Quinn ponders on if she is a threat due her continuing to look into Beecher's murder. (“The Perfect Mark”)

Having learned that Alonzo Quinn is the head of HR, Carter lies to him that she has realized she can't fight HR and is giving up on her investigation into Beecher's death. However, she uses the opportunity to create a forced pairing with Quinn's phone to continue her work against HR. As a direct result, Carter spies on a meeting between HR and Peter Yogorov where Peter reveals that his men killed Beecher on orders from HR. After taking Peter into protective custody, Carter confronts him with his role in Beecher's murder which he doesn't deny and points out how Alonzo Quinn was willing to kill his godson to help convince Peter to give her a sworn statement implicating Quinn. Using the statement from Peter, Carter draws Quinn into a trap where he apparently has her cornered and challenges him to kill her himself rather than outsourcing the murder as he did Beecher's. Believing himself to have the upper hand, Quinn tells her he doesn't relish having Beecher murdered but some sacrifices have to be made for the greater good. To compound his confession, Quinn tells Carter that his only mistake was not having her killed alongside Beecher so they could at least die together. Carter then reveals to Quinn that Finch recorded his confession in Beecher's murder before apprehending him and escaping with Reese's help. (“Endgame”)