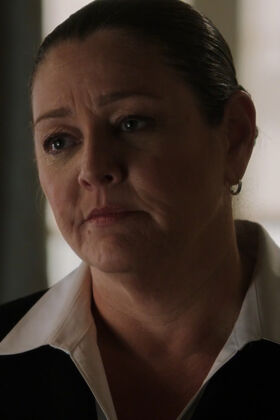 Control, often addressed as "Ma'am," is the codename used to refer to the head of the ISA's operation regarding the Machine, one of her aliases being Diane Claypool. She works out of the Pentagon. (“Most Likely To...”)

Control loses her mother at the age of nine. Due to this fact, she develops anxiety and high blood pressure extremely young.(“Control-Alt-Delete”)

She was inside The Pentagon at the time American Airlines Flight 77 was deliberately crashed into the building and helped with the subsequent search and rescue operations. This event prompted her to a have more active role against acts of terrorism and hardened her resolve to stamp them out in whatever way she can. (“Deus Ex Machina”)

Control meets with Special Counsel in his office to discuss a laptop that was used by runaway programmer Daniel Casey to hack into the Machine. Control orders Special Counsel to eliminate the laptop along with CIA agents John Reese and Kara Stanton in Ordos, China.

Control later meets with Special Counsel for reports on whether the ISA assassin they sent out to kill the buyers of the laptop from Rick Dillinger had succeeded. Special Counsel reports that one of the buyers escaped but Control isn't worried. Special Counsel, however, adds that the assassin apparently said that if she was sent sooner, she'd have "killed them all". It was then that Control gave orders to send Reese and Stanton to Ordos and have them eliminated along with the laptop which brought about the chain of events leading to the series Pilot. (“RAM”)

Control calls Special Counsel and Hersh after they find out that the Machine has moved itself to a new unknown location. She gives Hersh the order to "seal the room", meaning to kill everyone present, including Special Counsel.

She is later seen sitting in a black town car, perusing a file named "Memorandum for Control - Department recruitment status 2012-2013" when Hersh meets her in her car and tells her that Research has made contact with a new number. She tells him to get a team ready. (“God Mode”)

While searching psychiatric facilities for Root, Hersh calls Control to check in with her and confirm some information. (“Lady Killer”)

Former software engineer Arthur Claypool is diagnosed with a brain tumor that affects his memory. Control acts as Diane, a woman who claims to be his wife, and goes to visit him at the hospital. Arthur does not recognize her and tells her to leave his room. Sameen Shaw, who is posing as a doctor at the hospital, goes to comfort a very upset Diane, who explains how saddening it is to have someone she's loved and lived with for twenty years forget who she is.

Shaw and Harold Finch, both of whom are protecting Arthur after the Machine provides his number, take Arthur and Diane with them to a safe house. Finch, who has prepared aliases for the two of them, talks with Arthur about Samaritan, a code name for a project he was working on.

Finch then talks with Shaw about how Arthur frequently implied the creation of the Machine in his explanation, just as Arthur begins to forget things he learned earlier. Finch reminds Arthur who he and Diane are, and Arthur suddenly remembers that Diane is dead and that he buried her two years ago. Suddenly, "Diane" speaks into her watch the word "go" and agents pour into the room. Shaw tries to fight them off but is overpowered, and Hersh and his men come in and hold Shaw, Finch and Arthur at gunpoint. Control reveals herself to a stunned audience and then tells them that Samaritan was not canceled and in fact exists and that she wants to know where it is. She tells Finch that she also wants to know the location of the Machine. She pulls out a gun she had concealed and coldly declares that whoever tells her the location of their system first - Finch or Arthur - will be the one who stays alive. (“Lethe”)

Control asks Finch and Arthur where Samaritan is, and Finch insists that the project was shut down. Control holds her gun to Arthur, who tries his best to remember - but to no avail. She then leans over to Shaw and says that she enjoyed watching her work before ordering Hersh to kill them all. Root suddenly bursts in and shoots at the men, allowing Finch, Arthur and Shaw to escape. Hersh shoots Root in the arm and she is captured; Hersh pursues the other three while Control prepares to meet with Root.

Root is brought to a cell inside a government facility, where Control sits down with her and asks her how to access the Machine. Root continues on with taunting retorts at Control, prompting Control to pull out a bag of syringes. She injects a barbiturate into Root's right arm to put her to sleep, and then an amphetamine in her left arm to wake her up. Control explains the process to Root, saying that it's an interrogation method one can withstand for only so long before their heart explodes. She reveals countless other syringes and proceeds to repeat the process until Root gives in.

As night falls, the interrogation has continued to go on, and Root screams in agony, unable to take much more. Control claims that Root can make it all stop if she shows how to access the Machine. Root finally gives in and reveals that she is in fact the Machine's interface, saying that only she can communicate with it. Control brings in a phone upon Root's request, but Root says that she is acting on the Machine's behalf - Control is surprised as to why Root considers the Machine a superior force, but Root claims it is far greater. Control figures the only way to permanently halt Root's communication with the Machine is to do it physically, and explains how a person's ear will be useless if the Stapes bone is removed or damaged. She goes on to perform a Stapedectomy on Root without anesthesia.

Root is now deaf on her right ear - she reveals to Control that the Machine has been giving her Morse code messages from the phone Control brought in earlier, giving Root essential information, and has also somehow "disabled" Control's guards, who are lying on the floor, unconscious. Root says that she knows Control brought a knife with her because she is scared of Root, and that Root was able to pickpocket it when Control came close by to perform surgery on her ear. Root also says that Control brought a scalpel along - something Root figures is "a fair fight" - before she lunges at Control (having cut her bonds with the knife) and holds it to her head.

Root asks the Machine what to do with Control - she then reveals information the Machine gave her on Control. A visibly frightened Control asks Root what she wants, and Root, voicing the mind of the Machine, ominously recites to Control: "do not pursue me or my agents - I'm trying to save you." Control asks what the Machine is trying to save her from, and Root laughs, saying, "isn't she the best?" referring to the Machine. Control's fate is first left unknown (“Aletheia”) but later it is revealed that she is alive and well. (“Most Likely To...”) However, Vigilance finds a black budget report revealing that Northern Lights exists and at the end of the episode she decided to shut down the government's operations and destroys Vigilance's file.

She the attends a meeting in a New York City hotel, discussing about Samaritan as a successor to The Machine with Ross Garrison, Kyle Holcombe and Manuel Rivera. After convincing Manuel, Shaw breaks into the room and tells her that she is here to save her. Control is visibly surprised. After New York City's electricity sources are hacked by Vigilance, Control, along with the people at the meeting are kidnapped by Vigilance after a gunfight that killed General Holcombe. Then, Control, along with Garrison, Rivera, Finch and Greer are in a kangaroo court set up by Vigilance. (“A House Divided”)

After Peter Collier executes Rivera on the stands and Finch confesses to having built the Machine, Control proceeds to defend Finch against Collier much to the surprise of both parties. She also continues to rebuke Collier and his ideology. Soon Decima agents storm the location and a firefight breaks out in which Decima prevails. She and Garrison are escorted back to Washington DC while Greer orchestrates the bombing of the trial location and blames Vigilance for it. Greer uses this "act of terrorism" to convince Garrison of hand over the government feeds to Samaritan. Control still remains the head of ISA operations and is later seen receiving Hersh's autopsy report. (“Deus Ex Machina”)

During one of her operations, Control questions Samaritan's intel regarding a terrorist attack and threatens to have its representative, Travers, arrested for disobeying her orders. This results in a stand-off between Travers and Control with Travers shutting down the entire operation until Garrison finally convinces Control to back down.

Control continues to investigate Yasin Said, the lead suspect in the terrorist plot but is abducted by Reese and Root while on the trail of Said. She is questioned by them and Finch regarding Shaw's whereabouts but cannot provide any answers as she is unaware of Samaritans attack on the stock exchange. Finch states she is merely a pawn in these proceedings and does not have any idea of Samaritan's true objectives. A team of ISA operatives led by Grice and Brooks raid the location and eventually rescue her. Control tracks down Yasin Said to Canada and executes him even after he pleads his innocence. She later visits the basement of The New York Stock Exchange and discovers a fresh coat of paint on the walls as she slide her finger on the wall. (“Control-Alt-Delete”) After then, she starts to doubt about Samaritan and does deeper research about it.

By disabling the brake in her car, Control abducts Shelly, a Samaritan operative, and after interrogating her, learns of a Samaritan plot known as The Correction. In the process, Shelly insists herself being an ordinary woman with family, and she freaks out when Control kills one of her former assistant, proven to be a Samaritan spy. But, after Control takes out some photos - including Shelly appearing in the White House - she starts to threan Control not to interfere The Correction, but Control shoots her instead. (“Asylum”)

Control feels the threat from Samaritan and meet Ross Garrison, with their phones put in a metal box for fear of under surveillance. She tries to convince him to stop Samaritan's power and perhaps use The Machine again, only to be rejected. She then enlists the help of Devon Grice and tries to stop the Correction, which she believes to be a attack on the Supreme Court, by confronting Greer. But he reveals that The Correction is actually a list compiled by Samaritan comprising criminals, disruptive outliers and disloyal people to be eliminated at the right time. As the subsequent deaths, including Grice and Schiffmann, flash on a screen before them, Greer tells Control that this was a test of loyalty which she has failed. She is then captured by Samaritan agents and taken away. Her fate remains unknown. (“YHWH”)

Retrieved from "https://personofinterest.fandom.com/wiki/Control?oldid=81018"
Community content is available under CC-BY-SA unless otherwise noted.