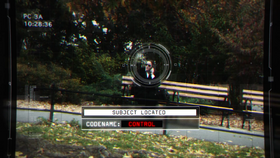 "Control-Alt-Delete" is the 12th episode of Season 4 and the 80th produced hour of Person of Interest. It originally aired on January 13, 2015.

Control, who oversees the handling of relevant numbers for the government, begins to question the methods and intentions of the Samaritan program. Also, alarming news reports of a pair of vigilantes rampaging through the Northeast begin to surface.

Control + Alt + Delete (usually abbreviated as Ctrl+Alt+Del) is a keyboard combination which is used to interrupt or make an attempt to interrupt some running program on IBM PC compatible computers. The computer's behavior in response to a Ctrl+Alt+Del key combination is determined by the operating system. Legacy versions of Microsoft DOS and Windows initiated a system reboot when the user pressed Ctrl+Alt+Del.