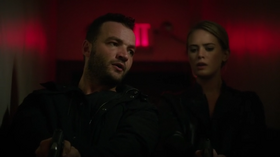 Crimson Six is an ISA team composed of Brooks (Crimson 6B) and Grice (Crimson 6A), who was trained by Shaw. They receive missions and information from Research 2.0, formerly known as Research, and are closely supervised by Control.

Crimson Six is introduced when they are tasked with destroying vials containing a deadly virus. However, their mission is later amended and they are tasked with securing the virus and delivering it to a contact en route to their location. While inside the building, Grice runs into Shaw, but lets her escape. (“Honor Among Thieves”)

Later, Crimson Six must neutralize four members of a terrorist cell in Detroit, Michigan. They are able to kill three, but the fourth, Said, escapes. Control contacts the team on a secure line and orders them to retrieve Said's laptop and look at the hard drive. Brooks and Grice manage to corner Said and view his laptop, but it then combusts.

Crimson Six and other ISA operatives receive Control's location after it is sent to them through a button on Control's watch band used in case of emergencies. The operatives arrive on site and engage in a shoot out with Root who subsequently escapes. Reese fights with Grice, but lets him live when he realizes that Grice let Shaw escape. (“Control-Alt-Delete”)

After learning about a possible terrorist attack, Control asks Grice to investigate the alleged target of the attack, the U.S. Supreme Court. Grice, however, doesn't find any explosive devices. He is later found shot in the head because Samaritan identified him as disloyal and had him killed as part of the Correction. (“YHWH”)