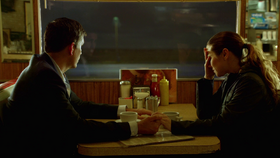 "Cura Te Ipsum" is the fourth episode in Season 1, and the fourth produced hour of Person of Interest. It originally aired on October 13, 2011.

Reese and Finch follow their latest POI, Dr. Megan Tillman, while she's on call and after hours to unravel the threat surrounding the promising young physician within 24 hours.