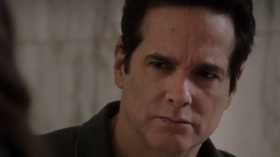 Cyrus Wells is a janitor who was formerly a millionaire banker and businessman.

Cyrus and his two college friends Sarah Lind and Alex Rice opened up a financial firm following their graduation. The firm became very successful by betting against the housing market bubble. On April 4, 2009, a jealous competitor hired Root to send in a hitman, who opened fire on Cyrus and 14 other people inside their offices. Cyrus was among the survivors but Alex and Sarah were killed. Following the incident, Cyrus gave his money away to charity and became a janitor cleaning the charity's bank.

In 2014, Cyrus becomes one of Root's persons of interest in her ongoing quest from the Machine. She meets him in the middle of his shift and later talks with him at a diner, where he says that he believes everything is "part of a greater plan". He informs Root that despite weather conditions, he always takes a walk in the park.

In a snowy Madison Square, Root watches Cyrus from a distance as she talks with Finch, who tells her that he has also received Cyrus' number because Root is a natural threat to him. Root gives Finch clues given to her by the Machine and goes to join Cyrus. Finch instructs Reese and Shaw to do what they can to protect Cyrus and Root.

At Cyrus' apartment, Root sees a picture of Alex and Sarah and asks who they are, but Cyrus refuses to divulge the information. Root tells him they have to leave, when suddenly, a sniper shoots at them. Cyrus and Root leave while Reese and Shaw fight off the attackers, who now include members of both Vigilance and Decima Technologies. Cyrus and Root manage to escape down a fire escape while Reese prevents Vigilance agents from following them.

On the street, Root steals some eggs under instructions from the Machine and throws them at a police car before handing the carton to Cyrus. The police naturally think that Cyrus is the one responsible and arrest him, thus getting him into the safety of police custody. Fusco takes custody of Cyrus and makes plans to turn him over to Reese for protection. However, at that moment, Root shows up claiming to be a new FBI agent and hands Fusco a federal warrant. Before he can protest further, the new precinct captain intervenes and Fusco has no choice but to turn Cyrus over to Root.

At the diner, Cyrus finally tells Root who Alex and Sarah were and explains the tragedy to her. They then take a walk in the park, only to be ambushed again by Decima operatives who utilize a jamming device to disconnect Root's connection from the Machine. Despite last-minute assistance from Reese, the agents successfully kidnap Cyrus.

Decima knows that Cyrus is one of only 15 people who have retinal access to the 19th floor in the building in which he works, which contains an office belonging to a company called Maxwell Limited, which is really a front company for the NSA. The office contains a chip storing activation data for Decima's recently acquired second Machine, Samaritan. Cyrus's eye is used to bypass the retinal scanner and the Decima employees prepare to execute him, but Reese and Fusco open fire on Cyrus' captors. Root arrives and takes Cyrus with her unarmed, as guns frighten Cyrus because of the 2009 incident. The chip, however, is stolen by Decima agents under the supervision of Greer who has set up on a neighboring rooftop.

Root and Cyrus later talk privately at one of Finch's safe houses. Cyrus is set for a safer life, and following his departure, Root tells Finch that she didn't tell Cyrus about her involvement in his past, since his belief guides him through life and it is helping him, and that she also feels that telling him the truth would serve to help her more than him. (“Root Path (/)”)