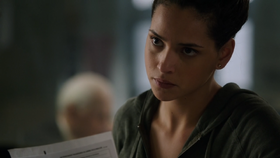 Dani Silva is an Internal Affairs detective in the NYPD who later transfers into the Gang Division.

Dani was a runner for a gang while she was in high school. Where she's from it was not a choice. Its either knocked up or locked up. She was arrested, and during prosecution the Judge gave her a second chance saying if she attended community college her records would be sealed.

She attended Community College and earned her masters in Criminal Justice. Thereafter she joined the NYPD Police Academy. One week before graduating "Howard" plucked her out and fixed it like she had quit. Howard had seen her Juvenile Record and was aware about her background and said that she was perfect for undercover anytime someone tried to infiltrate the academy.

Howard was tipped off by a confidential informant that the Brotherhood had a mole inside the academy hereby activating Silva for the undercover operation. She became a perfect undercover working as a NYPD recruit whose mission was to flush out a mole in the NYPD working for The Brotherhood. Silva was highly skilled at the academy making her unliked by her fellow recruits. During her undercover work she becomes a target of Dominic and the Machine sends her number to Finch and Reese. The Brotherhood tries to frame her for the murder of her handler but with the help of Reese she clears her name and arrests the real mole. (“Point of Origin”)

After transferring to the Gang Division she begins tracking Albert Weiss, a nondescript hitman/cleaner for the mob, who has managed to stay off the police radar. At the same time the Machine sends Weiss' number to Finch who requests Fusco to look into him. Working together they stop Weiss from killing his next target but he manages to escape. Weiss breaks into Silva's home to kill her but is trapped by her and Fusco and after a brief fight is shot and killed by Silva. Fusco later tells her that she is a good cop and that she reminds him of a couple of his friends. (“M.I.A.”)

Dani is headstrong and extremely self-reliant, having constantly (it appears) found herself in situations with no real back-up, so her trust is hard to earn. She is however, highly intelligent, quick-witted and immensely cool under fire, making her a great ally in a firefight. She flirts with Reese at the end of their first collaboration, and comes to respect Fusco based on their time together.