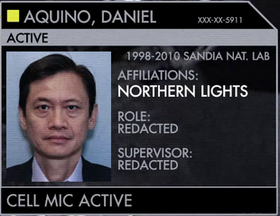 Daniel Aquino was a nuclear engineer who was part of a top secret government project called Northern Lights and was charged with building a storage facility for the Machine.

Born in Oakland, CA, he attended the University of California, Berkeley, earning a Bachelor of Science degree in Mechanical Engineering (ME) and Nuclear Engineering (NE) in 1987, and a PhD in Nuclear Engineering in 1990. His employment history states that from 1990-1998 he was employed at NASA's Jet Propulsion Laboratory (JPL), a research organization affiliated with the California Institute of Technology on behalf of NASA. From 1998-2010, Aquino worked at the Sandia National Laboratory, another government lab located in the desert of New Mexico, conducting nuclear weapons research.

Finally, he was approached and recruited by Lawrence Szilard (“God Mode”) to be part of a team of engineers who worked on a Special Access Program (SAP) called "Northern Lights". The nature of this employment is classified. (“Relevance”)

At some point after building the facility housing the Machine, he became a loose end by asking too many questions. In order to resolve the problem, he was framed for selling designs of a nuclear centrifuge to Hezbollah on the orders of Special Counsel so that the Machine would detect a threat to national security and send his Social Security Number to ISA operatives to eliminate the threat. He was killed by Sameen Shaw. (“Relevance”)

Two years later ISA operative Michael Cole suspected Aquino of being innocent and discovered that the money trail was spoofed. His inquiry into the matter with the help of CIA agent Veronica Sinclair got Cole killed and forced Shaw to go on the run.