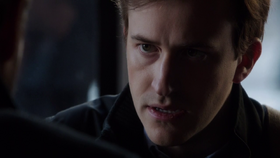 Daniel Casey is a freelance hacker who specializes in testing the security of computer systems. He worked for many years as a part of various tiger teams.

Casey was hired by the government to try to hack into The Machine so that they could control it. While he managed to find and enter the backdoor that Nathan Ingram had installed, he only had access for a short time before The Machine adapted to his presence and locked him out. Casey was able to capture a small amount of source code during the hack which was saved on his laptop, but the experience aroused suspicion that the government's motivations were more nefarious than simple security testing. Withholding his knowledge of the backdoor, he reported that he could not hack The Machine, thinking he would simply be sent home; however, the government never intended that he leave alive.

Casey was drugged and was placed in the trunk of a car and driven off towards an unknown location to be disposed of. However, the car crashed during the ride there, killing the drivers, and Casey was able to escape. He retrieved his laptop from the wreckage and went on the run. (“RAM”)

Casey became a target of the CIA, among others. This rendered him a person of interest and Finch, then working with Rick Dillinger, received his number from the Machine. Dillinger was sent out to follow Casey and followed him to a restaurant. There, a man named Lambert and claiming to be with the SSCI met with Casey. The man offered Casey protection, but Casey was suspicious and asked when the SSCI was created. The man didn't know, confirming Casey's suspicions that he was a fake. Casey quickly fled and warned Lambert not to follow him.

Dillinger approached Casey in the alley next to the restaurant following the meet and talked with him, when CIA agents John Reese and Kara Stanton ambushed them, taking Casey and putting him in their car. Shooters led by Lambert then opened fire on Reese and Stanton, allowing Casey to be rescued by Dillinger.

Much to Finch's chagrin, Casey was brought to the Library by Dillinger, who couldn't decide where else to take him. Finch dismissed Dillinger in frustration towards the latter's aggressive attitude, and Casey began talking to Finch. Casey pulled out his laptop and began explaining his story to Finch, who examined the code on Casey's laptop and recognized it as The Machine's code. He then built a virus out of the code and declared that the laptop should be sold, hoping that it would at least get Lambert's organization off Casey's back. Dillinger, who was listening in from outside the whole time, burst in and announced that the Chinese were interested in buying it. He drugged Finch, took the laptop, and told Casey to continue running.

Casey called Lester Strickland, a friend of his who had prepared a cover identity for him. Strickland, under the duress of Stanton, told him to meet him. Suddenly, Lambert and his team burst in and a shootout ensued from which only Lambert and Stanton escaped alive. Finch regained consciousness and raced to try to help Casey, calling him on the way. Finch tracks down Casey on the street, but finds that Reese is already there. As he starts to call 911, Kara asks Reese what Casey's status is. Reese fires two shots and then tells Kara that Casey is dead. Once he hangs up, Reese tells the still-living Casey that he's realized that Casey is no traitor. He hands Casey a bus ticket and an address in Canada where he can find someone who will help him disappear. However, Reese says that first he needs a couple of Casey's molars as proof of his "death" and takes out a pair of pliers, offering to let Casey do the job himself. Finch watches on in amazement at Reese's decision to spare Casey's life. (“RAM”)

In the present day, Casey is residing in a house in the Canadian wilderness, when Root pays him a visit. When Casey wonders who she is, Root explains that they have "a mutual friend" and advises him to get his gun, fake passport, and stash of money because he's taking a trip. She tells Casey to go to Cartagena, Colombia, and find a man named Greenfield, setting up Casey's cabin to explode as she talks. Casey wonders what she's doing and Root admits that she attracted the attention of some armed men, and they'll soon be there. When Casey wonders how she knows so much about him, Root says that their mutual friend needs their help. (“RAM”)

Travelled to Perth at some point and stayed at a safe house. Root sent Daizo to meet with him there. (“Root Path (/)”)

At some point between the events of Beta and A House Divided, Casey, Jason Greenfield, Daizo and Root, stole several computer equipment from various companies within the tri-state area.

After gathering everything they needed, including the seven Samaritan servers misplaced by Root, they travel to New York with Root where they are introduced to Reese and Shaw. Casey expresses his displeasure of Reese because he made him pull out two of his teeth as proof of death for the CIA.

They go to Reese's safe house where Root gives them instructions to make certain modifications to the Samaritan servers and also to find out the locations a tracking device Root pulled out from a car of a Decima operative to know where it had been. Root leaves them to their tasks.

Later, Root called them to get a status update and they stated there had been some complications with the servers but that the work is proceeding, also, that they had been unsuccessful in retrieving data from the tracker. At some point, Root uploaded data from a USB drive retrieved from a Vigilance operative which contained a Stuxnet based virus and tasked them with finding its target. When they discover the intended target was the power company they promptly called Root providing her with the information.

With the servers ready and after getting a location from the tracking device, they travelled to a facility where a part of Samaritan was being stored. Root gives each of them an envelope with new identities and told them a car would take them where they needed to go. (“A House Divided”)

Casey's new identity is one of the seven created by Root and hard coded in the servers for Samaritan to ignore. According to Root, Casey is one of the people who might have a chance of taking the world back from Samaritan since they can't stop it at that point. (“Deus Ex Machina”)