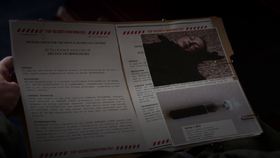 Decima Technologies is a private intelligence firm initially believed by Harold Finch as having developed a virus designed to infect the Machine. Decima is connected to a covert group in league with the Chinese to steal U.S. data, and is based in Shanghai. Finch discovers that only a small percentage of the data stolen goes to the Chinese, with the remainder going to another: an unknown recipient. The Office of Special Counsel is also aware of Decima. The organization is responsible for the creation of Vigilance.

The only known leader of Decima is John Greer, identified by the Machine as the firm's Director of Operations (“Root Path (/)”).

Although Decima's director of operations manipulated and brainwashed Kara Stanton to download a virus to target the Machine so they might get administrative access to it, Finch anticipated such a contingency might arise. The laptop that was sold to the Chinese contained a code that Finch developed to teach the Machine how to put itself into "God Mode", where it could not be harmed and could protect itself, thus foiling Decima's first attempt to access the Machine.

A brief background of Decima can be found in Special Counsel's memorandum (“Zero Day”).

After the failure of their attempt to wrest control of the Machine, Decima turned their attention to developing an alternative and previously abandoned open-system artificial intelligence, Samaritan. Though Finch convinced Samaritan's creator, Arthur Claypool, to destroy the remaining drives containing the Samaritan program, Decima were able to take the real drives into their possession (“Aletheia”).

Over the course of early 2014, Decima stole an extremely powerful computer chip and a number of high-power generators on which to run Samaritan (“Root Path (/)”) (“Allegiance”). They then convinced Congress and the government to approve a limited 24-hour beta test of the program (“Most Likely To...”).

Greer's exposition of his aims and his behavior towards Samaritan suggest that Decima's purpose is not to control artificial intelligence, but to follow it (“A House Divided”).

Decima operatives sign an insurance policy upon their employment in the organization where it is sent to their families upon their death, including accident or suicide. If caught or captured, that policy nullifies (“A House Divided”).

By engineering a high-profile terrorist attack by Vigilance, Decima are able to convince the government to grant them permanent access to official feeds, allowing Samaritan to come online with full cognitive capabilities. As of April 2014, Samaritan is active and under the protection of Decima (“Deus Ex Machina”).

Known Allies in the U.S Government