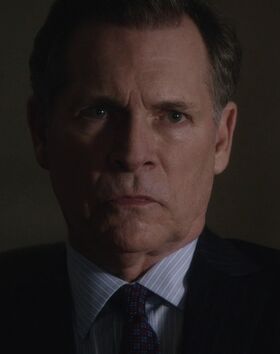 Denton L. Weeks worked for the office of the Assistant to the President for National Security Affairs (APNSA) and was Alicia Corwin's supervisor. He was one of the few people to know of the Machine's existence.

Weeks was the government official who commissioned the development of the machine. At an unspecified point in time, Weeks was appointed head of a task force on Privacy and Information, reporting directly to the President's Chief of Staff. Prior to that promotion, he had already been working in corporate law for a decade as a member of the White House legal team and a specialist in security policy. (“Bad Code”)

Weeks and Corwin arrived unannounced at Nathan Ingram's office to question him about the Social Security Number Ingram gave to Corwin in a previous meeting.

Demanding an explanation as to how a computer program could spot a traitor when federal agents couldn't he tried to gain more knowledge about how the machine worked. He appeared slightly agitated when Ingram did not answer his questions but relunctly accepted it when he learned that Ingram had sold the machine to the government for $1.

He did not know that the Machine had already evaluated him as a possible threat.

Finch later revealed to Ingram that Weeks had been unsuccessfully trying to hack into the Machine via the incoming NSA feeds for the previous six months. (“Super”)

Following the murder of Alicia Corwin by Root, Weeks met with Special Counsel to discuss ways to impede the police investigation of her death. They had just started to remove evidence when Weeks received a message from his mistress about an emergency. Not knowing that Root had set it up to lure him to his getaway lodge, he drove there and got knocked out by Root with a sedative. (“The Contingency”) Root then tortured him using Palestinian hanging, an enhanced interrogation technique that was once authorized in a top-secret DOD memo signed by Weeks, trying to get him talking about the whereabouts of the Machine.
While Root was away to gas up the car, Weeks recognized Finch and convinced him to help him escape. Weeks managed to free himself and attacked Root when she returned. He beat her up and then turned her gun on Finch threatening to shoot him unless he told him what he knew about how to access the Machine. Despite Finch telling Weeks all that he wanted to know, Weeks tried to shoot Finch anyway in order to protect the secrecy of the Machine. Just as planned by Root, however, the gun didn't fire and Root first tased Weeks and eventually killed him by shooting him in the chest. (“Bad Code”)

Retrieved from "https://personofinterest.fandom.com/wiki/Denton_Weeks?oldid=81586"
Community content is available under CC-BY-SA unless otherwise noted.