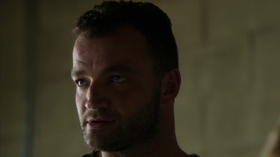 Devon Grice is an ISA operative, part of a two man team along with Brooks. The pair, codenamed Crimson 6, neutralize targets pointed out by Research in missions supervised by Control.

Grice was trained alongside with Shaw during the time in which she was still working as an ISA operative. (“Honor Among Thieves”)

Much like Shaw and her partner Michael Cole used to do, Grice neutralizes targets that are a threat to national security, despite not knowing how Research obtains the intelligence. He works with a partner, Brooks, both of them as the team codenamed Crimson Six. He also mentions prefering the old Research (the Machine) instead of "Research 2.0", as they had to handle the information regarding the numbers and think for themselves instead of simply eliminating enemies. (“Honor Among Thieves”) His missions are supervised closely by Control. (“Control-Alt-Delete”)

In one of these missions, Grice and Brooks are tasked with destroying vials that contain the deadly Marburg Virus in New York and eliminating all targets in the area. However, they are soon given new orders: secure the virus instead of destroying it and hand it to a secure courier who will be in the location.

Inside the building, Grice and Brooks encounter Shaw and another man while they're being threatened by another group. Shaw and the man are able to take out their enemies and in the end, Grice allows Shaw to escape. Soon after, Grice attempts to further help his former trainer by eliminating the footage of Shaw; however, Samaritan recovers part of it and slowly start analyzing it to determine who the subject is. (“Honor Among Thieves”)

Grice and Brooks are tasked with eliminating the four members of what appears to be a sleeper cell in Detroit. Along with another ISA operative (identified as Viridian 9A), they kill three of the targets but the remaining one, Yasin Said, is nowhere to be found. Grice and Brooks are tasked with pursuing the target once his whereabouts are determined by Research, but are later contacted by Control herself through a secure line to change the orders: they are not supposed to kill Said until they access his laptop hard drive and they must report only to her.

Grice and Brooks manage to ambush Said, cornering him inside of a building. Grice asks for the laptop at gunpoint and Said throws his backpack, runs and jumps through a window, falling off the street. Grice contacts Control as he access the laptop, but all of a sudden it bursts into flames and starts burning. Having lost the laptop, they are forced to stand down and let Said escape in order to find him later. Grice informs Control about the failure, much to her chagrin.

Control tries to pursue Said by herself, but ends up being ambushed and captured by Reese, Root and Finch, who are following a plan to find Shaw, currently missing. Control uses a tracking beacon hidden in her bracelet in order to feed her position to ISA operatives, including Grice and Brooks. While the other agents engage in a shootout, Grice fights against a badly injured Reese who manages to gain the upper hand. When Reese is about to knock Grice unconscious, he says "this is for Shaw" and Grice asks if he means Sameen. Reese realizes that he is the one who let Shaw escape previously and decides to just leave him there. (“Control-Alt-Delete”)

After learning about a possible terrorist attack, Control asks Grice to investigate the alleged target of the attack, the U.S. Supreme Court. Grice, however, doesn't find any explosive devices. He is later found shot in the head because Samaritan identified him as disloyal and had him killed as part of the Correction. (“YHWH”)