Person of Interest Wiki
Register
Don't have an account?
Sign In
Advertisement
in: Needs Update, Characters, Male Characters,
and 5 more 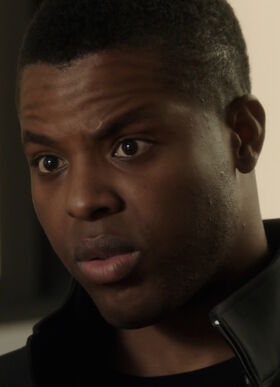 Dominic Besson, also known as his nickname Mini, is the leader of the Brotherhood drug gang.

Dominic is first mentioned in Panopticon as the leader of the Brotherhood, wanting a mesh network the Brotherhood could use without the NYPD's knowledge. Elias describes him as ambitious, as he was the recipient of the Whale, a heroin shipment that HR once received. (“Panopticon”)

Dominic then has Mickey retrieve a shipment full of guns, with Milo Jacobs, a longshoreman, dying in the process. (“Wingman”)

He is first seen entering the location of a drug dealing and becomes a victim of a drug deal gone wrong, sustaining wounds during the gunfight. He is loaded onto an ambulance, where Shaw appears after pretending to be a paramedic. He states that his nickname is Mini, due to his large size. She then kidnaps him, forcing him to reveal the address that Malcolm, Tracie and Reese are at. Shaw then leads him around the city, stopping to intervene when the Brotherhood attacks John, along with Tracie and Malcolm for the drug money.

She then takes him to a cellar, where she asks about the location of Dominic. Mini begins entering the first stages of shock, but still tells Shaw that the Brotherhood's rule is “We all die in the end.” Shaw leaves him there hoping that he'll go to Dominic for assistance. Instead, he leads her to a laundry mat, a front for the Brotherhood's drug operations. She holds him at gunpoint, using the drugs as leverage to force Link to release John. His identity is revealed after Erica Lennox asks for his boss's identity, saying "You just met him" after shooting her in the head and before dumping her body onto the street. (“Brotherhood”)

Dominic then has The Armorer recover missing high-powered guns, but loses them after a gunfight with Elias ends with them being confiscated by the police. He then meets with Elias, discussing the missing guns and Elias' role in the city, stating that his analogy to being a river is wrong and that he isn't a king. (“Pretenders”)

He is then seen again in a gym when discussing the execution of a man, after he failed to kill Silva. Shaw and Fusco eavesdrop on the conversation, confused as to why Mini can order an execution, when Finch realizes that Mini is actually Dominic, the nickname Mini is due to his actual name. This is confirmed when the shooter pleads for his life, shouting the name Dominic. Shaw then tries to take down Dominic when a group of children rush into the gym to play basketball.

Dominic meets with the actual mole, Ortiz. Ortiz asks Dominic for his uncles drug charges to be cleared, agreeing to steal files from the NYPD on Elias. Dominic tells Ortiz to hide in Spanish Harlem for protection.

He arrives in the Spanish Harlem School, after John, Silva and Ortiz escape the building. There he meets members of an ally cartel. Dominic talks about a teacher that stated that all of the world's infinite possibilities rest in a circle, and that the big, quiet kid could one day rule the streets of New York. He then talks about Detective Riley, taking out Elias and about soldiers not following orders, before having the lieutenant of the cartel kill his leader and join the Brotherhood. (“Point of Origin”)

Dominic begins his plans of taking out Elias to become the leader of the streets of New York. Armed with the files of Elias' business partners, he bribes and threaten them to join his cause, leaving Elias with few allies. After his doorman and his former friend and business partner Gino attempts to kill him, he is left with no options and only John and Scarface as firepower. Dominic goes to Gino's place where Elias, John and Anthony were just there and tries to find out more about Elias weaknesses. They he finds out that Elias strength or weakness is in a man called Bruce Moran. He tells his senior lieutenant Link to find Bruce saying if they find Bruce they have found Elias.

Dominic traces Elias to a building Elias owned, chasing him, John and Anthony to the top floor, where Elias reveals a hidden exit and a vault. Unable to open the vault, Elias and John exit the room, with Anthony getting shot along the way and remain in the room. Elias is puzzled by the contents of the vault thinking to himself that it contained leverage that enabled Elias to conduct his illegal activities and remain a free man. The Brotherhood boys torture Anthony so as to get the code to open the vault. Tired of waiting Dominic talks to Anthony attempting to turn him against Elias by making him huge promise but fails. Dominic then take his men to find Elias and find him. Dominic asks Elias for the code to the vault but Elias had one condition that he released Anthony. Dominic refuses but gives Elias a chance to talk to Anthony for the last time. Elias then tricks Dominic into activating a bomb hidden in the vault which ends up killing Anthony "Scarface" along with several Brotherhood soldiers. Elias escapes with the help of Reese and vows to avenge Scarface's death.

Dominic later on reflects on what might have gone wrong. He talks with Link and tells him that there's a group within the group that is protecting Elias, that is Detective Riley, the girl who pulled him out of the ambulance (Miss Shaw) and whoever is bankrolling their operations. He tells Link that Elias's guardians are not Law Enforcement or Criminals. He tells Link that there's always a game within the game. (“The Devil You Know”)

Some time after the attempt to take out Elias. Dominic starts expanding his business to provide protection and launder money for medical marijuana dispensaries. One of the dispensaries he is in business with is robbed. This makes Dominic so concerned that he looks into the matter himself. He meets up with Noah the dispensary owner to inquire on what might have gone wrong. During the talk with Noah, Dominic is aware of the "Spensers" a rival gang who at the time were trying to take over his new enterprise. During the interview Dominic learns of Detective Riley's involvement in the incident. He inquires on who was working at the dispensary the night before the robbery. Noah replies that there was a guard at the door, stock boy and Harper Rose a girl hired about a month before the robbery. Seeing that the guard and the stock boy were not suitable suspects. Dominic seeks to find Harper, asking Noah where to find her. Noah says that Harper is unavailable on the phone but provides the address to Harpers boyfriend. Dominic then sends Floyd to talk to Harpers boyfriend "Trey".

Dominic is later seen talking to Trey. Dominic, now aware about who Harper really is, a grifter who steals peoples identities and uses their id's to commit crimes. Dominic tells Floyd not to kill Trey as Riley may make an appearance later on and for sure Mr. Reese comes looking for Dominic and leaves Floyd a card for Dominic to contact him.

Dominic also agrees to a face to face meeting with Reese at a restaurant which ends in a stalemate.

Harper a con artist who was responsible for stealing the money turns the Brotherhood against the Cartel again but calls Dominic in advance. Dominic was impressed by Harpers actions and offers her a chance to work with him in the future. (“Blunt”)

The gang war between Elias and Dominic continued with Dominic killing three of Elias' men and disposing of their bodies. (“Terra Incognita”)

Elias retaliates by killing a number of Brotherhood soldiers, forcing Dominic to raid Elias' hideout and capture him along with Reese and Fusco. After viciously torturing the three of them Dominic is tricked by Elias into believing that Link, his best friend, is actually a traitor and in his rage he shoots Link dead. Laughing Elias reveals that there was no mole in his organisation and that this was a ploy to avenge Scarface's death. Elias acknowledges that Dominic is too powerful and was always going to win this war but now won't have the support of his own men after gunning down his best friend. (“Asylum”)

As Dominic prepares to execute Elias, Reese is put into God Mode by the Machine and breaks out of his bonds and single-handedly takes out all of the Brotherhood soldiers. Dominic tries to escape but is arrested by Fusco and the NYPD along with the remaining Brotherhood members.

As they are being transported to prison one of Elias' men crashes their van and tries to escape with Elias. Although injured, Dominic tracks them down and kills the man and prepares to shoot Elias but ends up in a stand-off with Fusco who convinces him to surrender. As soon as he lowers his weapon Dominic is killed by a shot to the head by a Samaritan sniper as part of The Correction. Elias is also shot in the chest but his fate is left ambiguous while Fusco is spared. Its later revealed that Fusco was able to save Elias. (“YHWH”) (“ShotSeeker”)