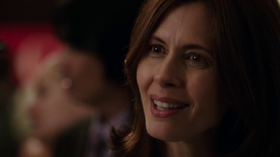 Elizabeth Bridges is a businesswoman residing in Tokyo, Japan. She meets Harold Finch at a conference in Hong Kong.

Their initial conversation appears to be standoffish as Elizabeth criticizes Harold's work. Still they manage to be on good terms, so much that Harold walks her home after the conference. The two bond over their love of mathematics. However, the moment is cut short when they are mugged by a delivery boy, who steals Elizabeth's and Harold's bags, along with Elizabeth's laptop.

Using the address of the bike the mugger used, they track down the shop and get their things back, Harold not wanting to go through official channels in order to avoid drawing the attention of Samaritan.

The two part on friendly terms after the conference, with Elizabeth asking Harold if he would be interested in meeting her the next month, when she attends a business meeting in New York. He gladly accepts, leaving her smiling.

Her contact from New York later calls her, informing her that he is interested in funding her company. The caller is actually an investor who works for Greer, indicating that Samaritan is interested in her work. Harold has also expressed ulterior motives in talking to her; he had arranged for her laptop to be stolen, in order to install a Trojan Horse on it.(“Pretenders”)​​​

Later on, Elizabeth calls Harold asking him if they want to meet over dinner. Harold agrees, having followed her with Root. However, a struggle ensues between Harold and Root, resulting in Harold drinking the neurotoxin meant for Elizabeth. Root hacks into Harold's college email account and sends Elizabeth a document discrediting all her work, as well as claiming to have destroyed the Trojan Horse activator. Elizabeth mentions to Harold that she never wants to see him again, thus losing his chance twice over to win the war against Samaritan, as the Trojan Horse will remain dormant. (“Skip”)​​​