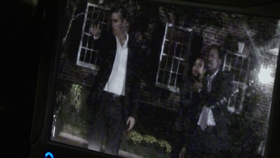 "Endgame" is the eighth episode of season 3, and the 53rd produced hour of Person of Interest. It originally aired on November 12, 2013.

The POI team’s war with HR nears a boiling point when Finch receives 38 numbers at once from the Machine. He discovers they are connected to an unknown player who is inciting an all-out war between the crime organization and the Russian mob. Meanwhile, Carter’s past is seen through flashbacks with her son’s father.

Endgame is a term used in chess, which refers to the final stage of a game, at which point most of the pieces are removed from the board. In the endgame, strategy changes, as the pawns (the weakest and smallest pieces on the chess board) who protected the king from checkmate, become less important as the king exercises his increasing power. Metaphorically, it is often used for the late revelation of a previously hidden major objective.