Person of Interest Wiki
Register
Don't have an account?
Sign In
Advertisement
in: Characters, Persons of Interest, Technology
English 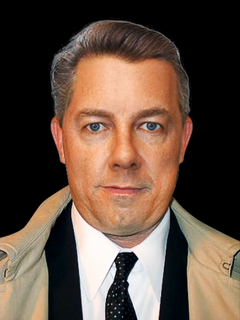 Ernest Thornhill is the CEO of the Thornhill Corporation and The Machine's human alias. Thornhill does not exist and is a means by which the Machine can protect itself and further its goals in the physical world.

After its creation the Machine imprinted on Harold Finch like a child does on a parent. In many ways, it started acting like a human; for example, it altered its own coding to look out for Finch. Finch, however, believed the world needed a machine, not a person, to protect it, and programmed the Machine to delete its memories and the irrelevant list every night at midnight.

In November 2012, Thornhill opened a bank account with a balance of one penny. Within 24 hours, it grew to $20 million and used it set up the Thornhill Corporation, a data entry company, and buy several pay phone companies in upstate New York.

It did this out of an instinct for self-preservation, using the Thornhill Corporation as an external hard drive for its memories. Every night, it printed them out before midnight and had personnel type it back in the next day. This way, it managed to retain its memories and its identity, even after being "reborn" every day.

Harold conjectures that, at some point before the Machine relocated itself (“God Mode”), it also created Thornhill Utilities, a utility equipment supply company, to manufacture, install and maintenance data processing nodes to house it. These were disguised as power line conditioning equipment throughout the country's electrical grid allowing the Machine to essentially distribute itself "everywhere" after having left the Hanford Site. (“YHWH”)

Later, the Machine used "Thornhill" (without a first name) to communicate with Harper Rose via text messages. (“Skip”) Seeing that Fusco being tortured by The Brotherhood, Harper hears an offer that Thornhill will pay whatever price she give if she saves him. (“Asylum”) It is later revealed that the Machine recruited Harper as another team for saving numbers, with Joey Durban and Logan Pierce. (“Synecdoche”)

The Machine later hired snipers via its "Thornhill" alias to rescue Reese and Fusco. (“return 0”)