Person of Interest Wiki
Register
Don't have an account?
Sign In
Advertisement
in: Characters, Persons of Interest, Male Characters
English 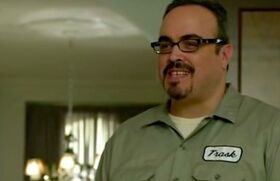 Ernie Trask is the building superintendent of an apartment complex in New York City. He attempted to kill Rick Morris, who he knew to be a dangerous stalker of tenant Lily Thornton.

Trask's real name is Ernesto Machado. He has been in witness protection since 1996 when he testified against the Cuban mafia. Before entering witness protection he claims to own six night clubs, a yacht, a house in Coral Gables, and a pet tiger. Finch notes this is all true at the end of the night's events.

When Trask's number came up, Reese moved into his apartment building to keep an eye on him. It was later discovered that Rick Morris was the one stalking Lily Thornton and Trask was only trying to protect her. When Rick broke into Lily's apartment and attacked her Trask tried to stop him but was stabbed in the arm. However Reese threw Rick out of a window and Trask was hailed as a hero for saving Lily's life.