View source
watch 01:36
We're Getting Mutants in the MCU - The Loop
Do you like this video?
Play Sound
Firewall 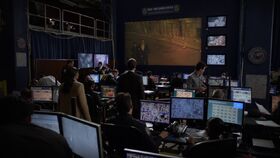 Season Finale. "Firewall" is the 23rd episode of season 1, and the 23rd produced hour of Person of Interest. It originally aired on May 17, 2012.

When a psychologist's number comes up, Reese must protect her from the crime organization HR while eluding capture by the FBI, who are closing in fast. Meanwhile, Finch receives an unwelcome visit from an old acquaintance.

Originally, a firewall was a fire-retardant barrier to restrict the spread of a fire. In the computer era, a firewall is a protection from outside access to a private computer or network.

POI Quotes Here is for season one, episodes 1-12:

6. Reese to Carter: “In my defense, **** didn’t look both ways before crossing the street.”

8 Some boy: “He also said that Vory are supposed to show respect to one another.”

9 Reese to Finch: “Some people the world can’t afford to lose.”

12 Reese to Finch: “What I said about our guy being boring, I take it back.”