View source
watch 01:36
We're Getting Mutants in the MCU - The Loop
Do you like this video?
Play Sound
Flesh and Blood 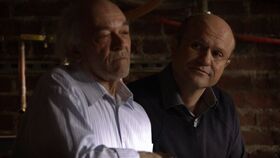 "Flesh and Blood" is the 19th episode in season 1, and the 19th produced hour of Person of Interest. It originally aired on April 5, 2012.

When The Machine spits out five numbers, naming the Don of each of New York's crime families, Reese and Finch suspect Carl Elias is planning to eliminate his competition.

Evidently the earliest known use of "flesh and blood" is in Matthew 16:17 and refers to family.