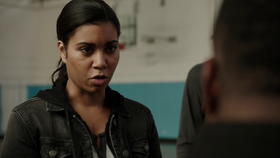 Floyd is a high-ranking member of The Brotherhood.

She works as Dominic's confidant in his plan to use Alex Ortiz to steal valuable information on Elias and his organisation from the NYPD database. (“Point of Origin”)

She kidnaps Trey Wender when his girlfriend steals drug money belonging to The Brotherhood. She is present alongside Dominic when he meets the Parral Cartel. (“Blunt”)

Floyd is present alongside Dominic and Link as they interrogate Elias, Reese and Fusco regarding a mole in the Brotherhood. (“Asylum”)

As the Brotherhood prepares to execute Elias and Harper Rose, a fax machine starts going off. A confused Floyd retrieves the fax and reads the strange directions aloud to Dominic. Unknown to either, the instructions are from the Machine to Reese on how to escape his bonds. Using the instructions Floyd read, Reese breaks free and is put into God Mode by the Machine. Guided by the Machine, Reese shoots Floyd non-fatally as she grabs a machine gun. Floyd is presumably arrested along with the rest of the Brotherhood by police officers that Fusco leads to their hideout. (“YHWH”)