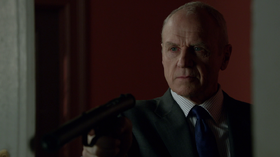 "Foe" is the eighth episode of season 1, and the eighth produced hour of Person of Interest. It originally aired on November 17, 2011.

When Reese and Finch discover that their latest POI has connections to Cold War's Eastern Bloc espionage circles, they quickly learn how covert ops were handled in a world before the Machine. The case also makes Reese reflect on his own life as a spy back when he worked for the CIA.