Person of Interest Wiki
Register
Don't have an account?
Sign In
Advertisement
in: Characters with Red Box 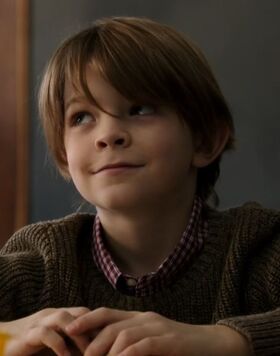 Gabriel Hayward is a young boy that is a computer genius and hacker, assigned by Samaritan to be its analog interface, instead of John Greer.

According to Samaritan, he is very intelligent, having taught himself computer programming and hacked the Defense Advanced Research Projects Agency and the Department of Defense. After Samaritan controls New York with a day of order and the next completely chaotic, the Machine agrees to have a negotiation between the two AIs. Hayward was used as an analog interface for Samaritan to talk to the Machine's avatar, Root. Though his acts seems to be still childish, including sketching and posting his drawings on the wall, he conveys Samaritan's ideas devotedly, like its will to rule with an iron fist. Yet, due to the value differences, there is no consensus between Samaritan and the Machine. (“The Cold War”)

He visits the White House with the identity of a visitor. When Richelli asks why he is there, Heyward, in Samaritan's point of view, says it was him that caused the stock market crash and the market will close at a precise point. Also, he wants to meet the President. On hearing this, Richelli orders his assistant, Jeanie, to bring Heyward out, thinking he must be a lost kid. Heyward warns that Mike’s personal portfolio will drop an additional 16%. Later, Gabriel shows up again and shows him the consequence that he predicted and leaves. (“Control-Alt-Delete”)

While Shaw is captured and captive by Samaritan and its agents, Greer fails to learn the location of the Machine from Shaw or convince her to betray her team after thousands of virtual simulations. As Samaritan regards her as a potential asset, it decides to try another approach. In an "outdoor teaching", as referred to by Greer (actually another simulation), Shaw watches how powerful and superior Samaritan can be, including eliminating Chechen terrorists before they could act and some mercenary businessmen. In the end, Greer takes Shaw to meet Hayward, who is quite surprised that he wasn't mentioned by Root. He reintroduces himself, and tells her about Samaritan's belief - that human society has been at the bottleneck and Samaritan can help, and the only choice for Shaw is to join them. Shaw isn't convinced, so Heyward presses a button letting several explosions demolish the farther building, warning that it will be the consequence if she resists such "self-destruction". While Shaw tells herself this can't be real, it turns out this is another simulation, with Greer beside her, asking her if she is convinced. (“A More Perfect Union”)