View source
watch 01:36
We're Getting Mutants in the MCU - The Loop
Do you like this video?
Play Sound
Get Carter 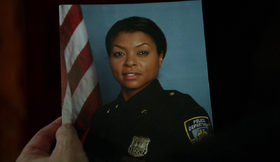 "Get Carter" is the ninth episode in season 1, and the ninth produced hour of Person of Interest. It originally aired on December 8, 2011.

Reese and Finch's game of cat and mouse with Detective Carter becomes infinitely more complicated when The Machine declares that she is their newest POI.

The Fort Totten tunnels (in Queens), part of a decommissioned Army Base within the city limits, serve as a the location for an Iraqi Forward Operating Base as established in the opening shot.
The filming took place on location on October 21, 2011.