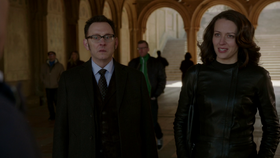 Season Finale. "God Mode" is the 22nd episode of season 2, and overall the 45th produced hour of Person of Interest. It originally aired on May 9, 2013.

Reese and Finch team up with surprising allies in a race to save The Machine from Root and the mysterious international organization Decima, who have both re-emerged with dangerous agendas. As the POI team faces off against enemies old and new, the nature of Finch's relationship with former partner Nathan Ingram is revealed along with his original motivation for wanting to save The Machine's irrelevant numbers. Meanwhile, in her mission to bring Cal Beecher's murderer to justice, Detective Carter finds herself up against the criminal organization known as HR.

In some types of gaming, God Mode is a set of rules (known as a mechanic) that make a character god-like or invincible.

Flashbacks to 2010 reveal the events behind the ferry bombing that killed Nathan Ingram and separated Finch from Grace.

(Shaw throws her automatic rifle to Reese) "What's this for?" "To help you feel less inadequate while I drive this thing." (Shaw)

”Did you know?” (Finch to The Machine)

"Like him? He's the only reason I'm sticking around." (Shaw about Bear)

"We gave the government the ultimate power." (Finch)

"You never trusted anyone. Not me. Not the Machine." (Nathan)

"I always knew there was someone behind Ingram. Like a black hole. Invisible, but powerful." (Special Counsel)