View source
watch 01:36
We're Getting Mutants in the MCU - The Loop
Do you like this video?
Play Sound
Grace Hendricks 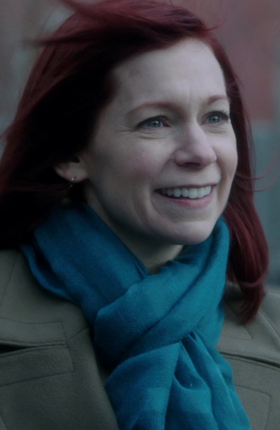 Grace R. Hendricks is Harold Finch's fiancée, who believes he is dead. Although Finch is unable to see her, he would occasionally sit in Washington Square Park, near her home, using an app that alerts him in case he ever gets closer than hundred meters around her. (“No Good Deed”)

Grace R. Hendricks was born on April 12, 1969 in Columbia, South Carolina, to Paul and Marilyn Hendricks. Her father was an alcoholic and throughout her growing up he continued to negatively affect the family. (“Beta”) In 1987 she enrolled in Rhode Island School of Design. After having spent her junior year in Venice, Italy (“Til Death”), she graduated with a B.F.A, followed in 1994 with an M.F.A from Yale University. (“The High Road”)

On May 8, 2004, while demonstrating the progress of the Machine to Nathan Ingram, Harold Finch was directed by the computer to Grace, who was painting in a park. Finch assumed the Machine's direction of him to her was a glitch. (“The High Road”)

After seemingly correcting the glitch, the Machine directed Finch to Grace again while she was painting in the park, a year later. Harold discovered that, because he had asked the Machine to direct him to people who had characteristics "one would not expect", it had directed him to Grace because she was the only person in the park who had no "dark secrets". The Machine kept on indicating that she liked Dickens, which while certainly not something "one wouldn't expect", made her a good match for Finch who liked Dickens as well. The Machine seemed to be matchmaking. This is an early foreshadowing of the Machine developing a personality and some kind of protectiveness for Finch. (“The High Road”)

In January, Grace was painting in the park again when Harold approached her eating an ice cream cone. He asked her if she wanted one, too. (“No Good Deed”) (“The High Road”) They started dating soon after, and Grace knew Finch as Harold Martin. On her birthday on April 12, 2006, Finch sent her on a scavenger hunt taking her to Guggenheim Museum where he surprised her with her favorite painting). At night they sit outside the museum and Finch begins to tell her that there is something he wants her to know about his past and that it might surprise her. Grace stops him, and the two kiss. (“Til Death”)

While on a date with Finch on September 13, 2010, Grace is presented with a copy of the book "Sense and Sensibility" by Jane Austen, which contains an engagement ring with which Harold proposes. She accepts and henceforth they are engaged. (“Zero Day”) They move in to live together at Grace's house near Washington Square Park.

Grace loses Harold in a ferry explosion which on September 26, 2010, which was orchestrated by the people Finch entrusted with the Machine. She assumes Harold is dead when she goes to the emergency triage center set up near the blast site, and is unable to locate him. She is told to check the personal effects of those whose bodies could not be recovered and finds the book with which he proposed to her severely damaged. (“God Mode”) (“No Good Deed”) What she doesn't know is that Finch survived the explosion with major injuries on his neck and lower back, but faked his death in order to protect Grace from the people trying to silence everybody who was involved in the project. (“God Mode”)

Shortly afterwards, Grace attends a memorial alone with a priest, who offers Finch his blessings. Grace tearfully says how she wishes Finch could have had at least one other person who cared about him. She cries as she looks on at the gravestone. (“Beta”)

Four years after the ferry incident, Grace works as a cover illustrator for The Boroughs magazine. She keeps a photograph of her and Harold in her living room unaware that he is watching her from afar in order to protect her from the people threatening the machine. It is implied that, even though her work as a non-digital illustrator is falling out of practice in modern culture, Harold has been assuring that she always has work through his many business connections.

Grace meets Reese when he locates Finch's early residence while attempting to learn more about him - he introduces himself as Detective Stills and helps carry her magazines inside. She briefly tells him about her life with Harold and Reese expresses sympathy. (“No Good Deed”)

Finch watches Grace leave her apartment from a distance wistfully before getting a call from the Machine with two new numbers. When he looks back, Grace is gone. (“Til Death”)

Finch sadly watches Grace leave her apartment, when he is confronted by Root, who threatens to harm Grace if Finch didn't help her locate the Machine. Finch has no choice but to comply. Root says that Grace thinks she writes children's books. (“Zero Day”)

Decima Technologies attempts to locate Finch using their recently acquired and activated surveillance system Samaritan - they are unable to find anything on Finch himself and instead look for close connections - Grace's identity comes up and Decima's leader John Greer has his men set out to find her.

Grace is leaving for a job interview for one in Italy, and her cab driver is in fact a Decima member. Before he can sedate her, Reese and Shaw appear and take him down, and take Grace with them. Grace is brought to the NYPD precinct and Fusco brings her to a safe room and gets her coffee. After a while, she notices the papers on the walls and finds a report concerning Stills having gone missing - realizing that Reese is a phony, she prepares to leave when Root gets in her way, warning her that armed men are waiting for her outside. Shortly afterwards, Root uses her phone to remotely set off a bomb in a nearby building, throwing off the police and allowing Grace to be safely escorted out. While they drive, a car crashes into theirs, and a Decima member named Zachary steps out. He grabs Grace and leaves, and despite Shaw and Reese's efforts to stop him, he escapes.

Grace is brought to Decima's Brooklyn headquarters and Zachary sets up a table in a dark cell. Greer sits down in front of her with tea. He opens a folder containing all of Grace's background info, and begins asking simple questions about her life, eventually asking if she had a lover. She mentions Harold, and this confirms Greer's suspicions, he asks more about Harold, saying that he was a very anonymous man an perhaps lied to Grace. Confused, Grace gets up to leave and Greer attempts to calm her down, and Grace then snaps, telling Greer about how her father being alcoholic and ruining the family made her good at identifying lies, and knew that Harold never did as she gave him her trust. Greer then gets up to leave, and simply tells her that her tea has gone cold when she asks why he's interested in Harold.

Grace is later taken by Greer elsewhere, and Greer confronts Reese and Shaw on a screen, telling them that he can give Grace back in exchange for Finch - the deal will take place on Jefferson Bridge. Reese decides to agree upon Finch's request.

At the bridge, Grace is blindfolded and brought out in front of a solemn Finch, while Zachary instructs her on where to walk. She stumbles and Finch catches her silently, looking on in sadness before leaving. Grace is taken by Reese and later brought back to her home. Reese reappears with an envelope given to him by Finch, which includes a passport with a new identity for Grace. Reese tells her that she has been accepted for her job in Italy. Grace is surprised, but Reese chooses not to talk any further and leaves - Grace asks him if he knew Harold, an Reese simply says that he knows she loved Harold and Harold loved her back. (“Beta”)

After being convinced by John Reese and the Machine to keep living, Finch returns to Grace in Italy where she's painting in public a week after Samaritan is destroyed. Grace is stunned to see Finch alive and well, having believed him dead for years. (“return 0”)