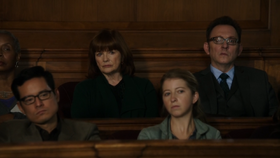 "Guilty" is the 14th episode of Season 4 and the 82nd produced hour of Person of Interest. It originally aired on February 10, 2015.

When the Machine arranges for Finch to sit on the jury of a murder trial, he begins to suspect that a fellow juror is set to rig the proceedings. Meanwhile, Reese begins to open up to the department’s therapist.

As the title suggests, the episode is about who is, or who feels guilty: Harold sits on a jury while Reese works in the background to keep the accused from falsely being convicted while each copes with his own feelings of guilt over the team's losses.

Jury Duty in the United States